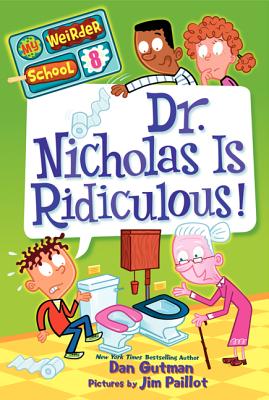 This is book number 8 in the My Weirder School series.

In this eighth book in the My Weirder School series, college professor Dr. Nicholas visits A.J.’s class to help the students improve their standardized test scores in history. The weird thing is, Dr. Nicholas doesn’t care about the date Christopher Columbus came to America, who wrote the Declaration of Independence, or other important historical facts. She’s more interested in weird information like the history of the toilet bowl! She even built a time machine to take the class on a field trip to the past and future. Who will get stuck in time? And how will they get out?