The School for Good and Evil #2: A World without Princes: Now a Netflix Originals Movie (Paperback) 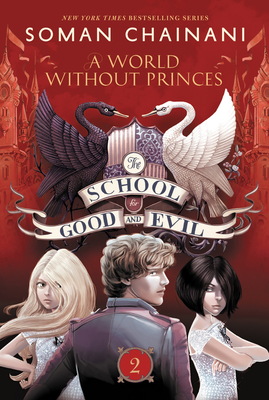 This is book number 2 in the School for Good and Evil series.

In the New York Times bestselling sequel to Soman Chainani's debut, The School for Good and Evil, Sophie and Agatha are back in Gavaldon, living out their Happily Ever After, but life isn't quite the fairy tale they expected. Now with a beautifully redesigned cover!

Witches and princesses reside at the School for Girls, where they've been inspired to live a life without princes, while Tedros and the boys are camping in Evil's old towers. A war is brewing between the schools, but can Agatha and Sophie restore the peace? Can Sophie stay good with Tedros on the hunt? And whose heart does Agatha's belong to—her best friend or her prince?

Soman Chainani has created a spectacular world that Newbery Medal-winning author Ann M. Martin calls "a fairy tale like no other, complete with romance, magic, humor, and a riddle that will keep you turning pages until the end."

Iacopo Bruno is a graphic designer and illustrator. He is also the illustrator of the acclaimed books Mesmerized: How Ben Franklin Solved a Mystery that Baffled All of France and Anything But Ordinary Addie, both by Mara Rockliff. He lives and works in Milan, Italy, with his wife, Francesca. Learn more about Iacopo at www.theworldofdot.com and www.iacopobruno.blogspot.it.