The School for Good and Evil #4: Quests for Glory: Now a Netflix Originals Movie (Paperback) 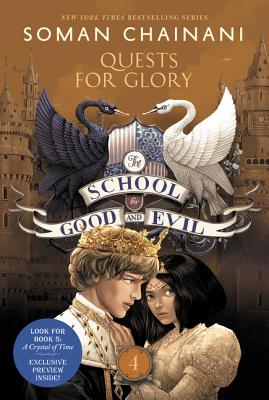 This is book number 4 in the School for Good and Evil series.

If Good and Evil can’t find a way to work together, neither side will survive. With every end comes a new beginning in the fourth installment of Soman Chainani’s New York Times bestselling School for Good and Evil series, Quests for Glory.

Join Sophie, Agatha, Tedros, and the other students as they begin a new era in the Endless Woods—The Camelot Years—where Evers and Nevers alike must move beyond the bounds of school and into the biggest, boldest adventures of their lives.

The students at the School for Good and Evil thought they had found their final Ever After when they vanquished the malevolent School Master. Now, on their required fourth-year quests, the students face obstacles both dangerous and unpredictable, and the stakes are high: success brings eternal adoration, and failure means obscurity forever.

For their quests, Agatha and Tedros are trying to return Camelot to its former splendor as queen and king. For her quest, Dean Sophie seeks to mold Evil in her own image. But soon they all feel themselves growing more isolated and alone.

When their classmates’ quests plunge into chaos, however, someone must lead the charge to save them . . .

Don't miss the thrilling conclusion to the beloved series, The School for Good and Evil #6: One True King!