PopularMMOs Presents Into the Overworld (Hardcover) 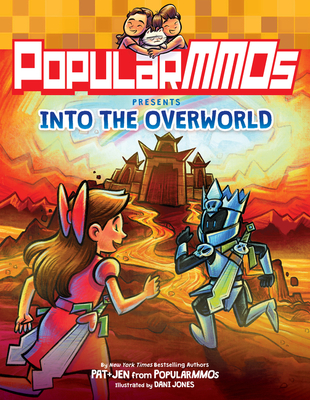 New York Times bestselling authors and YouTube sensations Pat and Jen from the beloved Minecraft-inspired channel PopularMMOs fall into a “fun-tastic” new world in their exhilarating fourth graphic novel adventure, Into the Overworld.

Pat and Jen do everything together, including saving the day! But when Jen and Evil Jen find out they have one chance to find their long-lost mother in the Overworld, Jen’s going to take it—even if it means that Pat can’t join her on an adventure for the first time ever.

With Mr. Rainbow’s help travelling to the Overworld should be the easiest part, but when something goes wrong, Jen and Evil Jen wind up trapped in the nether. Right about now would be the perfect time for Pat to help save the day, wouldn’t it? But turns out, Pat himself has been imprisoned by an old villain set on the revenge.

Pat’s desperate to escape because he knows something that Jen doesn’t . . . she’s walking straight into a trap! There’s an evil plot to start a zombie war brewing, and the person behind it may be the only one who could outsmart Jen and Evil Jen. Can Pat find a way to reach them in time and warn them before it’s too late?

Join the adventure in the fourth book of the New York Times bestselling graphic novel series from PopularMMOs, one of the most popular YouTubers in the world, with over 22 million subscribers and 14 billion views!

Pat and Jen, the stars of PopularMMOs, are two of the most popular YouTubers in the world. With over 16 million subscribers and 12 billion combined views, their Minecraft-inspired channel is one of the most-watched channels on YouTube. Pat and Jen live together with their adorable and rambunctious cat, Cloud. To learn more, visit Pat and Jen on YouTube @PopularMMOs and @GamingwithJen.

Dani Jones is an artist and writer who has illustrated children's books, comics, games, and magazines. When not drawing, she is most likely making a pie or watching a superhero movie. She currently resides in New Hampshire with her very hyper cat, Charles. Learn more about her work at www.danijones.com.