The World According to Humphrey (Paperback) 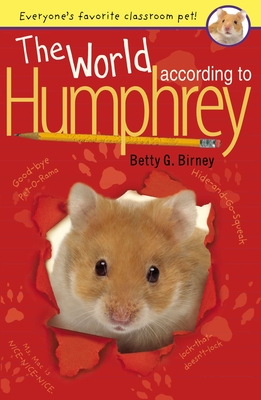 This is book number 1 in the Humphrey series.

The first book in the series about everyone's favorite classroom pet!

You can learn a lot about life by observing another species. That’s what Humphrey was told when he was first brought to Room 26. And boy, is it true! In addition to having FUN-FUN-FUN in class, each weekend this amazing hamster gets to sleep over with a different student, like Lower-Your-Voice-A.J. and Speak-Up-Sayeh. Soon Humphrey learns to read, write, and even shoot rubber bands (only in self-defense, of course). With lots of friends to help, adventures to enjoy, and a cage with a lock-that-doesn’t- lock, Humphrey's life is almost perfect. If only the teacher, Mrs. Brisbane, wasn’t out to get him!

Boys and girls can't help falling in love with Humphrey! Kids will be eager to get their paws on all 12 books in the series!

"A likable hamster narrates this novel for newly independent readers….Birney succeeds in developing the animal’s character without the narrative becoming too cute or contrived. Humphrey's views underscore the importance of knowing the full story before making judgments, and his presence makes a positive difference in the lives of the people he meets. All in all, a winning book that will appeal to children who like tales about animals, school life, and friendship."—School Library Journal

"The story deftly avoids triteness while still feeling breezy and acknowledging deeply felt troubles, such as Mrs. Brisbane's husband’s depression. The pet-care tips punctuating each chapter would benefit any youngster thinking about getting a hamster, but for everyone else, this read is simply good-good-good."—Kirkus Reviews