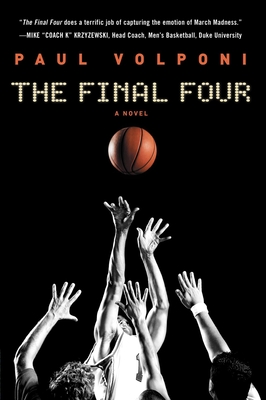 "Volponi, a multiple award-winning author, keeps the tension high from the first to last page ...The Final Four is definitely a winner." —VOYA, starred review

March Madness is in full swing, and there are only four teams let in the NCAA basketball championship. The heavily favored Michigan Spartans and the underdog Troy Trojans meet in the first game in the seminfinals, and it's there that the fates of Malcolm, Roko, Crispin, and M.J. intertwine. As the last moments tick down on the game clock, you'll learn how each player went from being a kid who loves to shoot hoops to a powerful force in one of the most important games of the year. Which team will leave the Superdome victorious? In the end it will come down to who has the most skill, the most drive, and the most heart.

"Volponi nails it when it counts in this dynamic story." —Booklist, starred review

Paul Volponi is a writer, journalist, and teacher living in New York City. From 1992 to 1998, he taught incarcerated teens on Rikers Island to read and write. This experience formed the basis of Black and White and Rikers High. From 1999 to 2005, Mr. Volponi taught teens in a drug-treatment program. The experience inspired him to write Rooftop. Mr. Volponi is also the author of Rucker Park Setup, Hurricane Song, and Response. An ardent street ball player, Mr. Volponi draws upon his more than four decades of New York City court-sense to write The Final Four.

Praise for The Final Four by Paul Volponi:

"Volponi, a multiple award-winning author, keeps the tension high from the first to last page ... The Final Four is definitely a winner." —VOYA, starred review

"A triple-overtime game keeps readers on the edge of their seats, but nerve-wracking as the action on the floor may be, the baggage that the players bring to the game is equally fraught." —BCCB, starred review

"Volponi nails it when it counts in this dynamic story." —Booklist, starred review