The Securitarian Personality: What Really Motivates Trump's Base and Why It Matters for the Post-Trump Era (Hardcover) 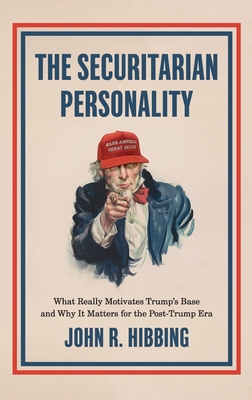 By John R. Hibbing
$29.95
Not currently on the shelf, but we can order it, to pick up in store or have shipped from our remote warehouse.

The Authoritarian Personality, which was published by Theordor Adorno and a set of colleagues in the 1950s, was the first broad-based empirical attempt to explain why certain individuals are attracted to the authoritarian, even fascist, leaders that dominated the political scene in the 1930s and 1940s. Today, the concept has been applied to leaders ranging from Trump to Viktor Orban to Rodrigo Duterte. But is it really accurate to label Trump supporters as authoritarians? In The Securitarian Personality, John R. Hibbing argues that an intense desire for authority is not central to those constituting Trump's base. Drawing from participant observation, focus groups, and especially an original, nationwide survey of the American public that included over 1,000 ardent Trump supporters, Hibbing demonstrates that what Trump's base really craves is actually a specific form of security. Trump supporters do not strive for security in the face of all threats, such as climate change, Covid-19, and economic inequality, but rather only from those threats they perceive to be emanating from human outsiders, defined broadly to include welfare cheats, unpatriotic athletes, norm violators, non-English speakers, religious and racial minorities, and certainly people from other countries. The central objective of these securitarians is to strive for protection for themselves, their families, and their dominant cultural group from these embodied outsider threats. A radical reinterpretation of the support for Trumpism, The Securitarian Personality not only provides insight into a political movement that many find baffling and frustrating, but offers a compelling thesis that all observers of American political behavior will have to contend with, even if they disagree with it.

John R. Hibbing, Foundation Regents Professor of Political Science, University of Nebraska-Lincoln John R. Hibbing is the Foundation Regents Professor of Political Science at the University of Nebraska-Lincoln. His previous works include Stealth Democracy and Predisposed: Liberals, Conservatives, and the Biology of Political Differences. He has received nine National Science Foundation grants, been named a NATO Fellow in Science and a Guggenheim Fellow, and appeared on Star Talk, NPR's Hidden Brain, and The Daily Show.