The Poseidon Project: The Struggle to Govern the World's Oceans (Hardcover) 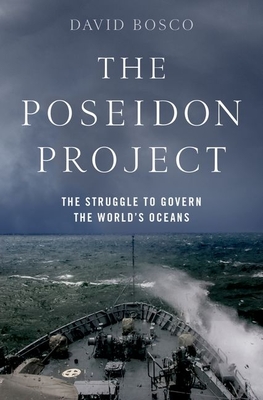 A vibrant exploration of past and present controversies surrounding control of the world's oceans. In 1609, the Dutch lawyer Hugo Grotius rejected the idea that even powerful rulers could own the oceans. A ship sailing through the sea, he wrote, leaves behind it no more legal right than it does a track. A philosophical and legal battle ensued, but Grotius's view ultimately prevailed. To this
day, freedom of the seas remains an important legal principle and a powerful rhetorical tool. Yet in recent decades, freedom of the seas has eroded in multiple ways and for a variety of reasons. During the world wars of the 20th century, combatants imposed unprecedented restrictions on maritime commerce, leaving international rules in tatters. National governments have steadily expanded
their reach into the oceans. More recently, environmental concerns have led to new international restrictions on high seas fishing. Today's most dangerous maritime disputes-including China's push for control of the South China Sea-are occurring against the backdrop of major changes in the way the
world treats the oceans. As David Bosco shows in The Poseidon Project, the history of humanity's attempt to create rules for the oceans is alive and relevant. Tracing the roots of the law of the sea and the background to current maritime disputes, he shows that building effective ocean rules while preserving maritime
freedoms remains a daunting task. Bosco analyzes how fragile international institutions and determined activists are struggling for relevance in a world still dominated by national governments. As maritime tensions develop, The Poseidon Project will serve as an essential guide to the continuing
challenge of ocean governance.

David Bosco is Associate Professor of International Studies at Indiana University's Hamilton Lugar School of Global and International Studies. He is the author of previous books on the UN Security Council and the International Criminal Court, Rough Justice (OUP 2014) and Five to Rule Them All (OUP2009). He also writes the Multilateralist blog. Previously, he served as a senior editor at Foreign Policy magazine and worked in post-war Bosnia on refugee issues.