Shopping for Bombs: Nuclear Proliferation, Global Insecurity, and the Rise and Fall of the A.Q. Khan Network (Paperback) 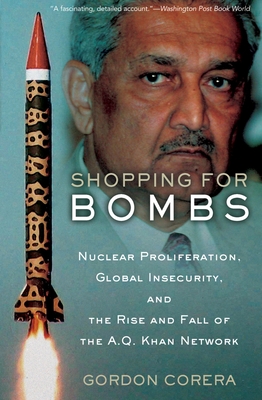 A.Q. Khan was the world's leading black market dealer in nuclear technology, described by a former CIA Director as at least as dangerous as Osama bin Laden. A hero in Pakistan and revered as the Father of the Bomb, Khan built a global clandestine network that sold the most closely guarded
nuclear secrets to Iran, North Korea, and Libya. Here for the first time is the riveting inside story of the rise and fall of A.Q. Khan and his role in the devastating spread of nuclear technology over the last thirty years. Drawing on exclusive interviews with key players in Islamabad, London, and Washington, as well as with members of Khan's own
network, BBC journalist Gordon Corera paints a truly unsettling picture of the ultimate arms bazaar. Corera reveals how Khan operated within a world of shadowy deals among rogue states and how his privileged position in Pakistan provided him with the protection to build his unique and deadly
business empire. It explains why and how he was able to operate so freely for so many years. Brimming with revelations, the book provides new insight into Iran's nuclear ambitions and how close Tehran may be to the bomb. In addition, the book contains startling new information on how the CIA and MI6 penetrated Khan's network, how the U.S. and UK ultimately broke Khan's ring, and how they persuaded Pakistan's President Musharraf to arrest a national hero. The book also provides the first detailed account of the
high-wire dealings with Muammar Gadaffi, which led to Libya's renunciation of nuclear weapons and which played a key role in Khan's downfall. The spread of nuclear weapons technology around the globe presents the greatest security challenge of our time. Shopping for Bombs presents a unique window into the challenges of stopping a new nuclear arms race, a race that A.Q. Khan himself did more than any other individual to promote.

Gordon Corera is a Security Correspondent for BBC News. He covers counter-terrorism, counter-proliferation, and international security issues for BBC TV, Radio, and Online. He has writen extensively on the British and American intelligence community and has worked as a foreign affairs reporter forBritain's Today show. He was educated at Oxford and Harvard Universities and joined the BBC in 1997.