History Has Begun: The Birth of a New America (Hardcover) 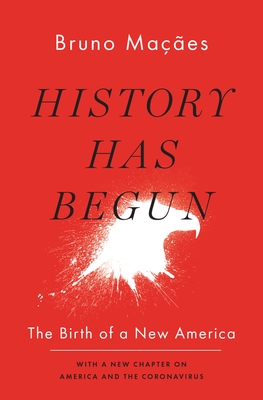 By Bruno Maçães
$29.95
Not currently on the shelf, but we can order it, to pick up in store or have shipped from our remote warehouse.

Popular consensus says that the US rose over two centuries to Cold War victory and world domination, and is now in slow decline. But is this right? History's great civilizations have always lasted much longer, and for all its colossal power, American culture was overshadowed by Europe until recently. What if this isn't the end? In History Has Begun, Bruno Ma��es offers a compelling vision of America's future, both fascinating and unnerving. From the early American Republic, he takes us to the turbulent present, when, he argues, America is finally forging its own path. We can see the birth pangs of this new civilization in today's debates on guns, religion, foreign policy and the significance of Trump. Should the coronavirus pandemic be regarded as an opportunity to build a new kind of society? What will its values be, and what will this new America look like? Ma��es traces the long arc of US history to argue that in contrast to those who see the US on the cusp of decline, it may well be simply shifting to a new model, one equally powerful but no longer liberal. Consequently, it is no longer enough to analyze America's current trajectory through the simple prism of decline vs. progress, which assumes a static model-America as liberal leviathan. Rather, Ma��es argues that America may be casting off the liberalism that has defined the country since its founding for a new model, one more appropriate to succeeding in a transformed world.

Bruno Ma��es is a non-resident senior fellow at the Hudson Institute, a senior advisor at Flint Global and a senior fellow at Renmin University of China. Formerly Portugal's Europe minister (2013-15), he has been a regular commentator for CNN, the BBC and Al Jazeera, and has written for The Financial Times, The Guardian, and Foreign Affairs. He is also the author of Belt and Road: A Chinese World Order and The Dawn of Eurasia. He lives in Istanbul.