Social Media, Freedom of Speech, and the Future of Our Democracy (Paperback) 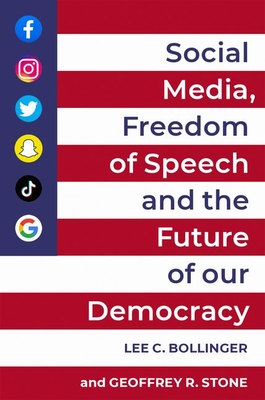 A broad explanation of the various dimensions of the problem of bad speech on the internet within the American context. One of the most fiercely debated issues of this era is what to do about bad speech-hate speech, disinformation and propaganda campaigns, and incitement of violence-on the internet, and in particular speech on social media platforms such as Facebook and Twitter. In Social Media, Freedom of Speech, and the Future of our Democracy, Lee C. Bollinger and Geoffrey R. Stone have gathered an eminent cast of contributors--including Hillary Clinton, Amy Klobuchar, Sheldon Whitehouse, Newt Minow, Cass Sunstein, Jack Balkin, Emily Bazelon, and others--to explore the various dimensions of this problem in the American context. They stress how difficult it is to develop remedies given that some of these forms of bad speech are ordinarily protected by the First Amendment. Bollinger and Stone argue that it is important to remember that the last time we encountered major new communications technology-television and radio-we established a federal agency to provide oversight and to issue regulations
to protect and promote the public interest. Featuring a variety of perspectives from some of America's leading experts on this hotly contested issue, this volume offers new insights for the future of free speech in the social media era.

Lee C. Bollinger became Columbia University's 19th president in 2002 and is the longest serving Ivy League president. He is Columbia's first Seth Low Professor of the University, a member of the Law School faculty, and one of the nation's foremost First Amendment scholars. Bollinger's books include: Uninhibited, Robust, and Wide Open: A Free Press for a New Century; Eternally Vigilant: Free Speech in the Modern Era; Images of a Free Press; The Tolerant Society: Freedom of Speech and Extremist Speech in America. And, his books co-edited with Geoffrey R. Stone include The Free Speech Century and National Security, Leaks and Freedom of the Press. Bollinger serves as a member of the Pulitzer Prize Board. As president of the University of Michigan, Bollinger led the school's landmark civil rights litigation in Grutter v. Bollinger, a Supreme Court decision that for the first time upheld the constitutional right of colleges and universities to engage in affirmative action to advancediversity in higher education. Bollinger is a fellow of both the American Academy of Arts and Sciences and the American Philosophical Society, and the recipient of ten honorary degrees and numerous awards, including the National Humanitarian Award from the National Conference for Community and Justice and the National Equal Justice Award from the NAACP Legal Defense and Educational Fund. Geoffrey R. Stone is the Edward H. Levi Distinguished Service Professor at the University of Chicago. Mr. Stone earned his J.D. from The University of Chicago Law School in 1971, where he served as Editor-in-Chief of The University of Chicago Law Review. After serving as a law clerk to Justice William J. Brennan, Jr. of the Supreme Court of the United States, Mr. Stone joined the faculty of The University of Chicago Law School in 1973. Mr. Stone has served as Dean of The University of Chicago Law School (1987-1994) and Provost of The University of Chicago (1994-2002). Mr. Stone is the author or co-author of many books on constitutional law. Among them are Democracy and Equality: The Enduring Constitutional Vision of the Warren Court (2020), The Free Speech Century (2018) co-authored with Columbia University President Lee Bollinger; Sex and the Constitution (2017); Top Secret: When Government Keeps Us In the Dark (2007); and Perilous Times: Free Speech in Wartime (2004), which receivedeight national book awards. Mr. Stone is the co-editor of one of the nation's leading constitutional law casebooks, chief editor of a twenty-volume series, Inalienable Rights, which is published by the Oxford University Press, and an editor of the Supreme Court Review.