Restricted Data: The History of Nuclear Secrecy in the United States (Hardcover) 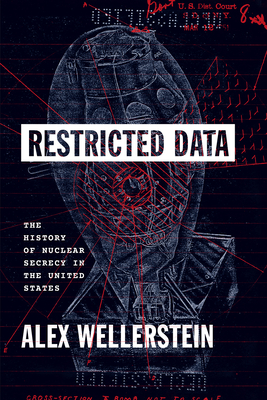 The first full history of US nuclear secrecy, from its origins in the late 1930s to our post–Cold War present.

The American atomic bomb was born in secrecy. From the moment scientists first conceived of its possibility to the bombings of Hiroshima and Nagasaki and beyond, there were efforts to control the spread of nuclear information and the newly discovered scientific facts that made such powerful weapons possible. The totalizing scientific secrecy that the atomic bomb appeared to demand was new, unusual, and very nearly unprecedented. It was foreign to American science and American democracy—and potentially incompatible with both. From the beginning, this secrecy was controversial, and it was always contested. The atomic bomb was not merely the application of science to war, but the result of decades of investment in scientific education, infrastructure, and global collaboration. If secrecy became the norm, how would science survive?

Drawing on troves of declassified files, including records released by the government for the first time through the author’s efforts, Restricted Data traces the complex evolution of the US nuclear secrecy regime from the first whisper of the atomic bomb through the mounting tensions of the Cold War and into the early twenty-first century. A compelling history of powerful ideas at war, it tells a story that feels distinctly American: rich, sprawling, and built on the conflict between high-minded idealism and ugly, fearful power.

Alex Wellerstein is assistant professor of science and technology studies at the Stevens Institute of Technology in New Jersey. He is the creator of the online nuclear weapons simulator NUKEMAP.

"It's a stunning achievement: a historical exercise that documents not just all the things we cannot know but all the things we only thought we couldn't know, and which Wellerstein's dogged research has dug out."
— London Review of Books

"In Restricted Data, Wellerstein has drafted one of the finest blueprints of our national security apparatus by focusing on nuclear weapons, its deepest cogs and wheels. He reveals the wiles, machinations, and ruses of physicists who first kept the secrets of the nucleus. He uncovers the prevarications, leaks, and conspiracies of the officers and bureaucrats who held those physicists to account. He has found a peephole into a stadium where the most important games are played. . . . Wellerstein asks brilliant questions that reach to the heart of what secrecy and science and security mean. . . . Wellerstein takes the reader down the long path to understand what nuclear secrecy meant, guiding the reader through the subject's many tangles."
— Los Angeles Review of Books

"Groundbreaking. . . . The best writers make the familiar seem foreign, challenging assumptions about a state of affairs we take for granted. It might seem obvious that building the most powerful weapon in the world, a device that could end human civilization, requires extreme secrecy. Yet Wellerstein peels back the layers of the nuclear onion to reveal a rich debate about what should be kept secret and why. . . . Wellerstein's book is compelling and frightening as it confronts the reader with the confounding questions that scientists and government officials faced when trying to decide what information should be withheld."
— Nature

"Secrecy was a defining aspect of the creation of the atomic bomb and, 75 years later, nuclear secrecy remains a feature of American democracy. In Restricted Data, Alex Wellerstein examines the health of democracy in the face of big science, big government, and big weapons."
— Science

"Wellerstein draws on a voluminous body of documentary research. . . . One of the great ironies of Restricted Data is that none of this research involved information that is currently secret. Though Wellerstein is clearly well versed in the art of filing Freedom of Information Act requests, he has no security clearance and professes not to want one. That a book of such calibre and depth can nevertheless be written is a testament both to Wellerstein's scholarship and to one of the book's central contentions: knowledge, once created, is very hard to keep secret."
— Physics World

"Based on interviews and years of tireless spadework in government archives, the present book showcases [Wellerstein's] talents as a researcher and a skillful writer of narrative and analysis. One of Restricted Data's many strengths is its reconstruction of the work of those inside the state who debated, designed, and performed the day-to-day bureaucratic practices of secrecy. The effect is one of demystification."
— Physics Today

"Restricted Data informs the present as much as the past. . . . The history of US nuclear secrecy is messy and fraught—all of which makes for delicious, if at times disturbing, reading."
— Bulletin of the Atomic Scientists

“Fascinating, truly fascinating, and readable, and I do mean readable.”
— Ploughshares Fund, Press the Button podcast

"One might suppose that nuclear secrecy is merely incidental to the larger history of nuclear weapons, but Wellerstein demonstrates that the subject is rich and dynamic and consequential enough to merit a history of its own. . . . Wellerstein is not just an accomplished historian who has done his archival homework, he is also a lively storyteller. And he leavens his narrative with surprising observations and insights. . . . [He] does an outstanding job of explaining how we got where we are today, and his analysis will help inform where we might realistically hope to go in the future. Restricted Data is bound to be the definitive work on the history of nuclear secrecy."
— Federation of American Scientists

"The scope of Wellerstein's thought-provoking book spans the scientific origins of the atomic bomb in the late 1930s all the way through the early 21st century. Each chapter chronicles a key shift in how the US approach to nuclear secrecy gradually evolved over the ensuing decades—and how it still shapes our thinking about nuclear weapons and secrecy today."
— Ars Technica

"An impressive and innovative monograph. . . . Restricted Data is not just a detailed chronicle of the ongoing secrecy versus anti-secrecy debate, but a profound, well researched and fluently written reflection on American social history since the Second World War, with multiple lessons to be learned."
— Engineering & Technology

"A coherent and convincing account of the evolving ambitions and control of systems of information concerning nuclear knowledge in diverse political and social arenas, based on an impressive, wide-range corpus of primary and secondary sources, as is demonstrated by the abundance and finesse of the endnotes and bibliography. . . . The book provides meaningful insights for STS scholars, especially around the questions of the relationship of science and technology with military and national defence, laws and rights, and power and governance."
— Metascience

"I’ve long believed that wrongful secrecy about our nuclear policies has endangered the survival of civilization. In Restricted Data, Wellerstein shows us how the dawn of the American atomic age ushered in a new era of state secrecy that became permanently embedded in US governance and culture. It’s a haunting look at the hidden mechanics of America’s top-secret nuclear program, and it asks vital questions about what happens when government secrecy becomes routine—and what it means for a global public left in the dark. My answer: catastrophic risk. It’s a monumental work."
— Daniel Ellsberg, author of The Doomsday Machine: Confessions of a Nuclear War Planner

"How much do you know about nuclear weapons? How much don't you know? In this sweeping, insightful, and utterly original history, Wellerstein recasts the nuclear age as a fundamental struggle about controlling knowledge. He convincingly shows how everything about these weapons was, from even before their existence, tied up with a system of secrecy that has since expanded far beyond the atomic domain. Essential reading."
— Michael D. Gordin, author of Red Cloud at Dawn: Truman, Stalin, and the Birth of the Atomic Monopoly

"Official secrecy is the ultimate form of government regulation, and Restricted Data explores the management of secrets about weapons that can literally destroy the world. As Wellerstein demonstrates, for the past eighty years the demands of the military have often conflicted with the needs of a democratic society. Wellerstein is one of the great nuclear historians of our time. This book is fascinating, essential reading not only for what it tells us about the origins and workings of America’s national security state but also for what it reveals about the nuclear dilemma we still face today: freedom or the illusion of safety."
— Eric Schlosser, author of Fast Food Nation and Command and Control

"Wellerstein's imaginative and perceptive retelling of the history of America’s nuclear weapons will revolutionize conventional thinking and scholarship. Understanding how nuclear secrecy was often used to keep the American public ignorant—rather than America’s adversaries—goes a long way toward explaining a Cold War arsenal of thirty-one thousand nuclear weapons that made no strategic sense. Restricted Data should be read by every concerned citizen, and President Biden should make it required reading for his national security team."
— Martin J. Sherwin, author of Gambling with Armageddon: Nuclear Roulette from Hiroshima to the Cuban Missile Crisis

"This book tackles a big and important subject—nuclear secrecy—and illuminates its history with a wealth of new detail. Wellerstein provides a long, sweeping overview of secrecy in the nuclear age, tracking its evolution from the pre-World War II discovery of fission to the present. He surveys a vital topic through the mastery of difficult archival sources and assembles a coherent, compelling narrative."
— Peter Westwick, author of Stealth: The Secret Contest to Invent Invisible Aircraft