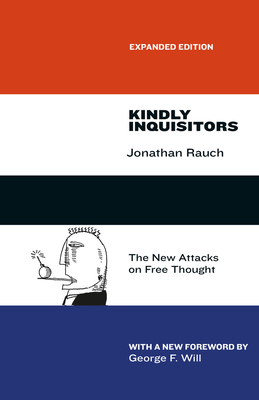 By Jonathan Rauch, George F. Will (Foreword by), Jonathan Rauch (Afterword by)
$16.00
Not currently on the shelf, but we can order it, to pick up in store or have shipped from our remote warehouse.

“A liberal society stands on the proposition that we should all take seriously the idea that we might be wrong. This means we must place no one, including ourselves, beyond the reach of criticism; it means that we must allow people to err, even where the error offends and upsets, as it often will.” So writes Jonathan Rauch in Kindly Inquisitors, which has challenged readers for more than twenty years with its bracing and provocative exploration of the issues surrounding attempts to limit free speech. In it, Rauch makes a persuasive argument for the value of “liberal science” and the idea that conflicting views produce knowledge within society.
In this expanded edition of Kindly Inquisitors, a new foreword by George F. Will strikingly shows the book’s continued relevance, while a substantial new afterword by Rauch elaborates upon his original argument and brings it fully up to date. Two decades after the book’s initial publication, while some progress has been made, the regulation of hate speech has grown domestically—especially in American universities—and has spread even more internationally, where there is no First Amendment to serve as a meaningful check. But the answer to bias and prejudice, Rauch argues, is pluralism—not purism. Rather than attempting to legislate bias and prejudice out of existence or to drive them underground, we must pit them against one another to foster a more vigorous and fruitful discussion. It is this process that has been responsible for the growing acceptance of the moral acceptability of homosexuality over the last twenty years. And it is this process, Rauch argues, that will enable us as a society to replace hate with knowledge, both ethical and empirical.
“It is a melancholy fact that this elegant book, which is slender and sharp as a stiletto, is needed, now even more than two decades ago. Armed with it, readers can slice through the pernicious ideas that are producing the still-thickening thicket of rules, codes, and regulations restricting freedom of thought and expression.”—George F. Will, from the foreword

Jonathan Rauch is a senior fellow in governance studies at the Brookings Institution, a contributing editor of the Atlantic and National Journal, and the author of six books, including Government’s End and Gay Marriage: Why It Is Good for Gays, Good for Straights, and Good for America.

Jonathan Rauch is a senior fellow in governance studies at the Brookings Institution, a contributing editor of the Atlantic and National Journal, and the author of six books, including Government’s End and Gay Marriage: Why It Is Good for Gays, Good for Straights, and Good for America.

Praise for the previous edition

“Fiercely argued. . . . What sets his study apart is his attempt to situate recent developments in a long-range historical perspective and to defend the system of free intellectual inquiry as a socially productive method of channeling prejudice.”
— Michiko Kakutani, New York Times

“Like no other, this book restates the core of our freedom and demonstrates how great, and disregarded, the peril to that freedom has become.”
— Chicago Tribune

“Stands out as a thoughtful, provocative defense of civil liberties and liberal inquiry. Jonathan Rauch’s unique perspective, derived from personal experience, lends to the poignancy of his thesis.”
— William F. Weld, former governor of Massachusetts

“To observe that American political and intellectual discourse has become polarized, intolerant of all but the most predictable ideological nostrums, censorial of anything deemed to be remotely ‘politically incorrect,’ and generally lacking in subtlety, a free spirit of inquiry, or honest quest for truth, has perhaps become trite. Twenty years ago it was less so, and it was then that Rauch wrote a book called Kindly Inquisitors. In retrospect, Rauch was extraordinarily prophetic in his assessment of the evolving state of free speech and thought. [This] newly updated version of Kindly Inquisitors provides an opportune moment to reflect on this extraordinarily deep and provocative essay, a true tour de force of logic, integrity and moral passion.”
— Forbes

“An eloquent attack on the advocates of political correctness.”

“It has been twenty years since the first edition of Kindly Inquisitors, yet conflicts persist. This book is worth a second look twenty years later. It will no doubt lead the reader to reflect upon the nature of social and political change within a technologically networked society.”
— ID: International Dialogue