Playing with Fire: The Story of Maria Yudina, Pianist in Stalin's Russia (Hardcover) 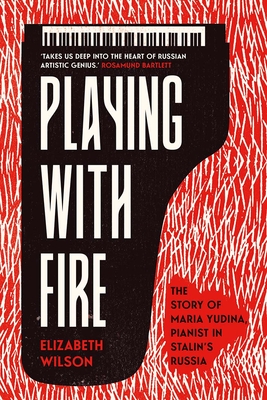 The first full biography of the fearless and brilliant Maria Yudina, a legendary pianist who was central to Russian intellectual life

Maria Yudina was no ordinary musician. An incredibly popular pianist, she lived on the fringes of Soviet society and had close friendships with such towering figures as Boris Pasternak, Pavel Florensky, and Mikhail Bakhtin. Legend has it that she was Stalin’s favorite pianist.

Yudina was at the height of her fame during WWII, broadcasting almost daily on the radio, playing concerts for the wounded and troops in hospitals and on submarines, and performing for the inhabitants of besieged Leningrad. By the last years of her life, she had been dismissed for ideological reasons from the three institutions where she taught. And yet, according to Shostakovich, Yudina remained “a special case. . . . The ocean was only knee-deep for her.”

In this engaging biography, Elizabeth Wilson sets Yudina’s extraordinary life within the context of her times, where her musical career is measured against the intense intellectual and religious ferment of the postrevolutionary period and the ensuing years of Soviet repression.

“Wilson, a Moscow-trained cellist and biographer of Shostakovich, has found details of, it seems, every concerto, every appearance, every job Yudina did.”—John Lloyd, Financial Times

“As this fascinating book shows, the real story of Yudina is more moving and extraordinary than any of the myths.”—Ivan Hewett, Daily Telegraph

“The author of biographies of Shostakovich and Rostropovich turns her attention to the great Soviet pianist Maria Yudina (1899–1970), famous for eccentricity and moral courage. Wilson emphasizes Yudina’s passionate intellectual life; a disciple of Bakhtin, . . . she was as interested in philosophy as she was in music.”—New Yorker

“Wilson illuminates the life of one of twentieth-century Russia’s most brilliant pianists and uncompromising individuals. . . . Through her meticulous research, Wilson disabuses us of the many legends that surround Yudina’s peculiar character.”—Nadia Beard, Times Literary Supplement

“Wilson, a musician and writer who authored a fine book on Dmitri Shostakovich, has now produced the first English-language biography of Maria Yudina, one of Russia’s greatest twentieth-century pianists. Her study gains strength from its vivid reconstruction of the classical music scene under Soviet rule.”—Tony Barber, Financial Times, “Best Summer Books of 2022: History”

“Based on decades of research, Wilson’s book is a testament to the life of an indefatigable survivor and uncompromising pianistic talent.”—Isaac Sligh, New Criterion

“A brilliant pianist closely connected with the leading lights of 20th-century Russian music, literature and philosophy, Maria Yudina was a seminal figure whose devout religious beliefs brought her into direct collision with the Soviet state. Elizabeth Wilson's great achievement is to have brought Yudina's extraordinary life out of the shadows. With this revelatory biography she takes us deep into the heart of Russian artistic genius at its most passionate and uncompromising.”—Rosamund Bartlett, author of Chekhov Scenes from a Life and Tolstoy: A Russian Life


“Maria Yudina, one of the great pianists of the 20th century, reached cult status in the USSR, but is still little known abroad. This fascinating biography by Elizabeth Wilson, combining scholarly erudition and captivating storytelling, not only fills this gap but reads like a powerful Russian novel!”—Mikhail Rudy, award-winning concert pianist


“So much more than a great and deeply unusual pianist, Maria Yudina was at once mystic and visionary, a pioneer of modernism and a tremendous friend to those who loved her. Few writers and musicians in the English-speaking world are better placed than Elizabeth Wilson to tell the story of this mysterious and far too little-known 20th century musician. And the story is a revelation.”—Gerard McBurney, composer and writer


“An engaging read that tells the story of Russia’s preeminent pianist of the 20th century in lucid and approachable language, this long-needed book illuminates Maria Yudina’s work and life through recollections of her contemporaries and considerable archival research.”—Elena Dubinets, Artistic Director of the London Philharmonic Orchestra


“Presents an absorbing picture of a tragic period of Russian history. At its center is the towering figure of Maria Yudina, a remarkable pianist and one of the most influential personalities of Soviet cultural life. A riveting read.”—Boris Berman, Head of Piano, Yale University School of Music