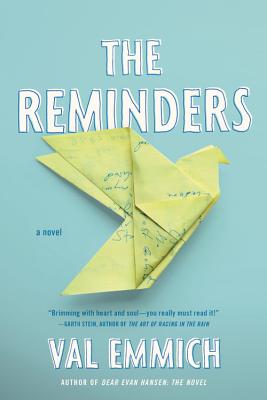 From the author of Dear Evan Hansen, The Reminders is perfect for fans of J. Courtney Sullivan's The Engagement or Graeme Simsion's The Rosie Project, and follows what happens when a girl who can't forget befriends a man who's desperate to remember.

Grief-stricken over his partner Sydney's death, Gavin sets fire to every reminder in the couple's home before fleeing Los Angeles for New Jersey, where he hopes to find peace with the family of an old friend. Instead, he finds Joan.

Joan, the family's ten-year-old daughter, was born Highly Superior Autobiographical Memory, or HSAM: the rare ability to recall every day of her life in cinematic detail. Joan has never met Gavin until now, but she did know his partner, and waiting inside her uncanny mind are startlingly vivid memories to prove it.

Gavin strikes a deal with Joan: in return for sharing her memories of Sydney, Gavin will help her win a songwriting contest she's convinced will make her unforgettable. The unlikely duo set off on their quest until Joan reveals unexpected details about Sydney's final months, forcing Gavin to question not only the purity of his past with Sydney but the course of his own immediate future. Told in the alternating voices of these two irresistible characters, The Reminders is a hilarious and tender exploration of loss, memory, friendship, and renewal.

Val Emmich is a writer, singer-songwriter, and actor. He has had recurring roles on Vinyl and Ugly Betty as well as a memorable guest role as Liz Lemon's coffee-boy fling, Jamie, on 30 Rock. His debut novel, The Reminders, was a B&N Discover selection that Library Journal called "quirky, touching, and addictive."

"Like Nick Hornby, Emmich has a knack for avoiding the
treacly and saccharine while finding magic in unlikely relationships."
—National Book Review

"Charming, raw and filled with empathy and sorrow, THE
REMINDERS is also a refreshing look into the lives of people on the road to
healing and new purpose, and for these reasons alone I give THE REMINDERS five
stars."

"this is a sad, sweet story of the pain and joy of
the past, the curse of remembering everything, and the importance of new
friendships."

"Beautiful and beguiling, a story that will stay with
you long after you finish reading it"
—Popsugar

"Val Emmich has created an indelible cast of complex and quirky characters who drew me in for an emotional and humorous ride. THE REMINDERS is a book brimming with heart and soul-you really must read it!"
—Garth Stein, bestselling author of The Art of Racing in the Rain

"In a story that is both startlingly original and deeply familiar, [Val Emmich] has given literature a remarkable young heroine, Joan, and a series of seemingly small events that add up to the kind of story small classics are made of. I could not stop reading, and was bereft when the story ended."
—Jacquelyn Mitchard, bestselling author The Deep End of the Ocean

"I thoroughly enjoyed The Reminders. It's a wonderful and unusual story told in a beautifully understated way. Quietly magnificent"—Ruth Hogan, author of The Keeper of Lost Things

"An endearing and wise novel. I adored the unlikely friendship between a gifted child who remembers everything and a grieving man who is trying to forget. Emmich brings a compassionate, often comical, and always true eye to his storytelling. Ten-year-old Joan says a good song should either make you want to dance or cry, and The Reminders does both."
—Eowyn Ivey, author of The Snow Child

"Emmich captures the voices of Joan and Gavin, two such different characters, brilliantly. Actor and musician Emmich (Vinyl; Ugly Betty; 30 Rock) can confidently add "novelist" to his list of achievements. He has written a quirky, touching, and addictive read."
—Library Journal

"This is a book that leaves you feeling better about
life and the role we play, either on purpose or inadvertently".
—Kirkus Review