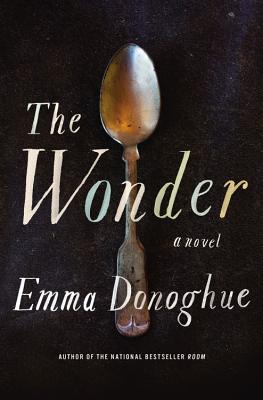 “Lib Wright, a protege of Florence Nightingale and a nursing veteran of the Crimean War, is dispatched from London to a remote Irish village to keep watch on Anna O'Donnell, a young girl who is rumored to have refrained from eating for four months yet continues to thrive. Miracle or hoax? Lib is determined to uncover the truth, but the truth is never simple. In this beautiful, haunting novel, Donohue weaves a tale of misguided faith and duty, exploited innocence, and redemptive love. What is the secret behind Anna's mysterious ability to survive? The truth is uncovered as The Wonder propels readers to a shocking conclusion.”
— Cathy Langer (M), Tattered Cover Book Store, Denver, CO

Now a Netflix film starring Florence Pugh: In this “old-school page turner” (Stephen King, New York Times Book Review) by the bestselling author of Room, an English nurse is brought to a small Irish village to observe what appears to be a miracle—a girl said to have survived without food for months—and soon finds herself fighting to save the child's life.

Tourists flock to the cabin of eleven-year-old Anna O'Donnell, who believes herself to be living off manna from heaven, and a journalist is sent to cover the sensation. Lib Wright, a veteran of Florence Nightingale's Crimean campaign, is hired to keep watch over the girl.

Written with all the propulsive tension that made Room a huge bestseller, The Wonder works beautifully on many levels -- a tale of two strangers who transform each other's lives, a powerful psychological thriller, and a story of love pitted against evil.

Acclaim for The Wonder:

"Deliciously gothic.... Dark and vivid, with complicated characters, this is a novel that lodges itself deep" (USA Today, 3/4 stars)

"A fable as lean and discomfiting as Anna's dwindling body.... Donoghue keeps us riveted" (Chicago Tribune)

Born in Dublin in 1969, Emma Donoghue is an Irish emigrant twice over: she spent eight years in Cambridge doing a PhD in eighteenth-century literature before moving to London, Ontario, where she lives with her partner and their two children. She also migrates between genres, writing literary history, biography, stage and radio plays as well as fairy tales and short stories.

She is best known for her novels, which range from the historical (Frog Music, Slammerkin, Life Mask, Landing, The Sealed Letter) to the contemporary (Akin, Stir-Fry, Hood, Landing). Her international bestseller Room was a New York Times Best Book of 2010 and was a finalist for the Man Booker, Commonwealth, and Orange Prizes.

"Fascinating.... Like The Turn of the Screw, the novel opens irresistibly, when a young woman with a troubled past gets an enigmatic posting in a remote place.... Heartbreaking and transcendent and almost religious in itself."—Sarah Lyall, New York Times

"[Donoghue's] contemporary thriller Room made [her] an international bestseller, but this gripping tale offers a welcome reminder that her historical fiction is equally fine."—Kirkus Reviews (starred review)

"Donoghue demonstrates her versatility by dabbling in a wide range of literary styles in this latest novel.... The closely imagined, intricately drawn story possesses many of the same alluring qualities as her bestseller, Room. .... Donoghue's engrossing novel is loaded with descriptions of period customs and 19th-century Catholic devotional objects and prayers...[and] asks daring questions about just how far some might go to prove their faith."—Publishers Weekly (starred review)

"Donoghue is known for her bestselling novel, Room.... [But] she is also well versed in historical fiction. THE WONDER brings together the best of all, combining a gracefully tense, young voice with a richly detailed historical setting."—The Millions

"Readers of historical fiction will gravitate to this tale."—Mary Ann Gwinn, Seattle Times

"A riveting allegory about the trickle-down effect of trauma."—Megan O'Grady, Vogue

"Donoghue poses powerful questions about faith and belief all the while crafting a compelling story and an evocative portrait of 19th-century Irish provincial society."—Tom Beer, Newsday

"Donoghue's superb thriller will keep readers hanging on to every word, pondering how far one will go to prove her faith."—Liz Loerke, Real Simple

"What at first seems a simple matter becomes far more-stick with it, the payoff is there."—Steph Opitz, Marie Claire

"Fresh and unusually lively historical fiction. [Donoghue's] latest novel brings together both her preoccupation with child peril and her gift for history."—Boris Kachka, Vulture

"A haunting novel about good vs. evil."—Brenda Janowitz, PopSugar

"Like [Room], THE WONDERexplores a dark, insular, and rigidly controlled environment.... Donoghue's clever use of an outsider as narrator lets her explain anomalies to us-what a creepie is (a log stool) and why people tie rags to a tree (to hold their pain)-as she encounters them herself. But there is more to this mystery than superstitions and local dialect. Lib must decipher the private truths of Anna and her family, who have closed ranks in grief over the loss of a son. She must puzzle out the community itself and its contradictory beliefs in religion, science, and tradition. And Lib has her own sorrowful secrets, her own need for personal redemption. Donoghue deftly pairs the two stories, and as Lib uncovers the truth about Anna, she gradually owns the truth about herself."—Roxana Robinson, O, The Oprah Magazine

"THE WONDER by Emma Donoghue is just that: 'a wonder' of a story about religious delusion and self-denial [that] teem[s] with drama and great moral questions.... Donoghue manages to engage larger mysteries of faith, doubt and evil without sacrificing the lyricism of her language or the suspense of her storyline."—Maureen Corrigan, Fresh Air

"Donoghue proves herself endlessly inventive.... This is the kind of book that will keep you up at night and make you smarter."--Julie Buntin, Cosmopolitan

"All spectacle and gothic horror and inevitably hard to put down."—Stassa Edwards, Jezebel

"Has that vivid, ripped-from-the-headlines feel that comes from an author's utter fascination with a real-world subject.... THE WONDER is deliciously gothic.... Dark and vivid, with complicated characters, this is a novel that lodges itself deep."—Steph Cha, USA Today, 3/4 stars

"A fine work, adept and compelling in voice, plot, and moral complexity.... Donoghue deals out the cards with real skill."—Katherine A. Powers, Boston Globe

"A locked-room mystery, set in atmospheric 19th-century Ireland and as spare, in its own way, as Room.... A fable as lean and discomfiting as Anna's dwindling body.... Donoghue keeps us riveted to Lib's perspective throughout.... Thanks to the complexity of Donoghue's ideas, there's plenty on which to ruminate."—Amy Gentry, Chicago Tribune

"Donoghue, a writer of great vitality and generosity-one gets the sense that she would gladly have her characters over for dinner, as long as they'd agree to eat-has been drawn repeatedly to the genre of historical fiction not so much to inhabit or reinterpret the past as to try to fit together its overlooked, missing pieces.... Fiction is small solace for history's grief, but it's one way to set the record straight."—Alexandra Schwartz, New Yorker

"Donoghue is a master of plot, and her prose is especially exquisite in depicting ambiguity...

Lib is a heroine the modern woman can admire."—Sarah Begley, Time Magazine

"As in "Room," Ms. Donoghue proves a shrewd observer of the parental urge to distort reality to protect children-and themselves"—Sam Sacks, The Wall Street Journal

"An excellent new novel that is as much a mystery as it is an analysis of the extent to which some people are governed by their faith."—Houston Chronicle

"This a completely engrossing read-you will barely be able to tear yourself away from it".—Next Avenue