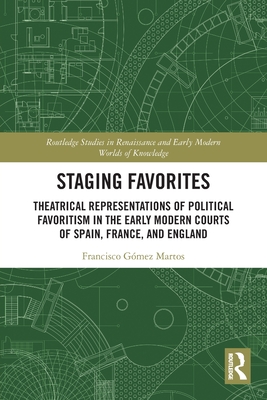 By Francisco Gómez Martos
Email or call for price.

During this time, the courts of Spain, France, and England were dominated by all-powerful ministers who enjoyed royal favor. The politics of royal favoritism gave rise to a significant group of plays which constitutes the subject of this book. While scholars have studied this group partially and separately in national context, Staging Favorites approaches these "dramas about favorites" from a wider European point of view, and performs comparative analyses of a number of plays - including La paciencia en la fortuna; Le Favori, ou la Coquette; and Sejanus His Fall - and adds new detail and differentiation to the early modern perception and representation of the royal favorite.

This book will appeal to scholars and students interested in early modern literature, history of theater, and cultural history.