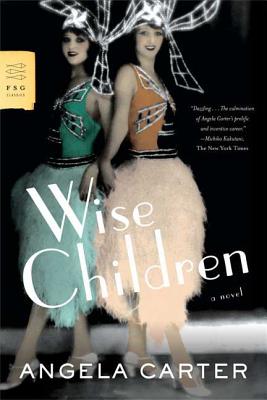 In their heyday on the vaudeville stages of the early twentieth century, Dora Chance and her twin sister, Nora—unacknowledged daughters of Sir Melchior Hazard, the greatest Shakespearean actor of his day—were known as the Lucky Chances, with private lives as colorful and erratic as their careers. But now, at age 75, Dora is typing up their life story, and it is a tale indeed that Angela Carter tells. A writer known for the richness of her imagination and wit as well as her feminist insights into matters large and small, she created in Wise Children an effervescent family saga that manages to celebrate the lore and magic of show business while also exploring the connections between parent and child, the transitory and the immortal, authenticity and falsehood.

Angela Carter (1940-1992) was the author of many novels (including Nights at the Circus)¸ collections of short stories, plays, and books for children.

“Wise Children inhabits its own manic universe and would probably translate into a spirited, bawdy musical comedy-farce of the kind which the Chance sisters themselves performed, long ago.” —Joyce Carol Oates, The New York Times Book Review