The Country Girls: Three Novels and an Epilogue: (The Country Girl; The Lonely Girl; Girls in Their Married Bliss; Epilogue) (FSG Classics) (Paperback) 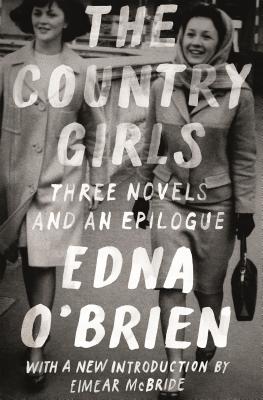 A treasure of world literature back in print, featuring a new introduction by Eimear McBride

This omnibus edition includes the novels The Country Girls, The Lonely Girl, and Girls in Their Married Bliss.

The country girls are Caithleen “Kate” Brady and Bridget “Baba” Brennan, and their story begins in the repressive atmosphere of a small village in the west of Ireland in the years following World War II. Kate is a romantic, looking for love; Baba is a survivor. Setting out to conquer the bright lights of Dublin, they are rewarded with comical miscommunications, furtive liaisons, bad faith, bad luck, bad sex, and compromise; marrying for the wrong reasons, betraying for the wrong reasons, fighting in their separate ways against the overwhelming wave of expectations forced upon "girls" of every era.

The Country Girls Trilogy and Epilogue charts unflinchingly the pattern of women’s lives, from the high spirits of youth to the chill of middle age, from hope to despair, in remarkable prose swinging from blunt and brutal to whimsical and lyrical. It is a saga both painful and hilarious, and remains one of the major accomplishments of Edna O’Brien’s extraordinary career.

Edna O’Brien has written more than twenty-five works of fiction, including The Little Red Chairs and The Light of Evening. She is the recipient of numerous awards, including the PEN/Nabokov Award for Achievement in International Literature, the Irish PEN Lifetime Achievement Award, the National Arts Club Medal of Honor, and the Ulysses Medal. Born and raised in the west of Ireland, she has lived in London for many years.

Eimear McBride is the author of the novels The Lesser Bohemians (winner of the James Tait Black Memorial Prize) and A Girl Is a Half-formed Thing (winner of the Bailey's Women's Prize for Fiction, the Kerry Group Irish Novel of the Year Award, the Goldsmiths Prize, and others). She was the inaugural creative fellow at the Beckett Research Centre, University of Reading, and occasionally writes for The Guardian, the Times Literary Supplement, New Statesman, and The Irish Times.