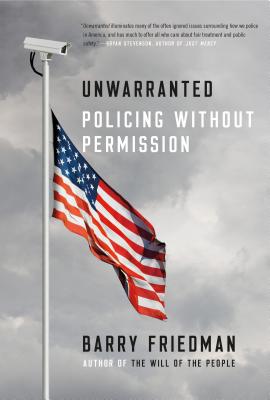 By Barry Friedman
$17.00
Not currently on the shelf, but we can order it, to pick up in store or have shipped from our remote warehouse.

“At a time when policing in America is at a crossroads, Barry Friedman provides much-needed insight, analysis, and direction in his thoughtful new book. Unwarranted illuminates many of the often ignored issues surrounding how we police in America and highlights why reform is so urgently needed. This revealing book comes at a critically important time and has much to offer all who care about fair treatment and public safety.” —Bryan Stevenson, founder and Executive Director of the Equal Justice Initiative and author of Just Mercy: A Story of Justice and Redemption

In June 2013, documents leaked by Edward Snowden sparked widespread debate about secret government surveillance of Americans. Just over a year later, the shooting of Michael Brown, a black teenager in Ferguson, Missouri, set off protests and triggered concern about militarization of law enforcement and discriminatory policing. In Unwarranted, Barry Friedman argues that these two seemingly disparate events are connected—and that the problem is not so much the policing agencies as it is the rest of us. We allow these agencies to operate in secret and to decide how to police us, rather than calling the shots ourselves. And the courts, which we depended upon to supervise policing, have let us down entirely.

Unwarranted tells the stories of ordinary people whose lives were torn apart by policing—by the methods of cops on the beat and those of the FBI and NSA. Driven by technology, policing has changed dramatically. Once, cops sought out bad guys; today, increasingly militarized forces conduct wide surveillance of all of us. Friedman captures the eerie new environment in which CCTV, location tracking, and predictive policing have made suspects of us all, while proliferating SWAT teams and increased use of force have put everyone’s property and lives at risk. Policing falls particularly heavily on minority communities and the poor, but as Unwarranted makes clear, the effects of policing are much broader still. Policing is everyone’s problem.

Police play an indispensable role in our society. But our failure to supervise them has left us all in peril. Unwarranted is a critical, timely intervention into debates about policing, a call to take responsibility for governing those who govern us.

Barry Friedman holds the Jacob D. Fuchsberg Chair at the New York University School of Law. He is a constitutional lawyer and has litigated cases involving abortion, the death penalty, and free speech. He lives in New York City.

“An important book about the 21st-century rules of engagement for counter-terrorism, police work, surveillance and crime prevention . . . Unwarranted shakes us from what we've allowed ourselves to accept.” —Matt Welch, The Wall Street Journal

“Broad . . . accessible . . . [Unwarranted] looks beyond the lethal use of force at many other ways the Fourth Amendment protection against ‘unreasonable searches and seizures’ has been ignored or stretch in the name of public safety.” —Bill Keller, The New York Times Book Review

“Barry Friedman unravels the current state of out-of-control policing in an incisive, provocative, and beguiling overview and remedy.” —Shelf Awareness

“Friedman's lively writing and clarity of expression enable him to make the thicket of applicable Fourth Amendment law readily understandable for general readers, helpfully illuminated by the personal stories behind the case law. At once creative and conservative, Friedman offers a timely blueprint for recovering democratic control of local and national law enforcement.” —Kirkus Reviews (starred review)

“Drawing on landmark court cases, extensive history, and incisive analysis, Friedman takes a hard look at current problems and proposes astute and well-researched solutions in favor of more 'democratic and constitutional' policing . . . [Unwarranted] is the definitive guide to contemporary policing and its necessary reforms.” —Publishers Weekly

“A powerful manifesto against unbalanced policing methodologies and an illuminating and sobering critique of political and legal forces in the U.S.” —Booklist

“This important, accessible book diagnoses the many pathologies of modern policing in contexts ranging
from inner-city crime to terrorism. Barry Friedman lays the responsibility for our policing ills somewhat
on courts but primarily on us, the policed. He provides fresh, concrete guidance for how judges and the
American people can make modern policing democratically accountable, lawful, and effective.”
—Jack Goldsmith, Henry L. Shattuck Professor of law at Harvard University

“The relationship between citizens and the police is one of the most urgent constitutional questions in American life today. In this path-breaking book, Barry Friedman argues that, instead of judges reviewing police conduct after the fact, citizens should take responsibility for police conduct before the fact. By insisting that all citizens reflect about the Constitutional provisions that govern how the police act, Friedman makes a passionate case that the responsibility for policing the police is a job for all of us.”
—Jeffrey Rosen, President & CEO, National Constitution Center

“In Unwarranted, Barry Friedman takes us on a journey through America’s problems with policing and
surveillance to confront a hard but necessary truth. Our nation’s problem with policing reflects a failure of
democratic engagement. This book makes a necessary and, until now, missing contribution to our national
conversation about policing reform.”
—Sherrilyn Ifill, President and Director-counsel of the NAACP Legal Defense and Educational Fund

“At a time when policing in America is at a crossroads, Barry Friedman provides much-needed insight, analysis, and direction in his thoughtful new book. Unwarranted illuminates many of the often ignored issues surrounding how we police in America and highlights why reform is so urgently needed. This revealing book comes at a critically important time and has much to offer all who care about fair treatment and public safety.” —Bryan Stevenson, founder and Executive Director of the Equal Justice Initiative and author of Just Mercy: A Story of Justice and Redemption

“In this thoughtful, reform-minded book, Barry Friedman shows us how advances in technology have dramatically expanded both the capabilities of the police and the means by which citizens can hold them accountable. But he also shows us how today’s concerns over mass surveillance and unwarranted searches of electronic evidence are just the latest instances of problems in policing that have persisted for lack of democratic governance of the profession. Friedman’s argument for real democratic accountability in policing is fresh and offers hope. Unwarranted should be a companion for any citizen who wants to move beyond tabloid news and the protest line and join the nation’s police leaders in the evolution of the public profession most present in people’s everyday lives.” —Brandon del Pozo, Chief of Police, Burlington, Vermont.

“The notoriously broad discretion that police routinely exercise in enforcing the law has long been accepted as a necessary element of the job. Unwarranted calls into question that received wisdom, and makes a stirring case for holding accountable the most powerful public servants in most people’s daily lives.” —David Cole, National Legal Director of the ACLU and author of No Equal Justice: Race and Class in the American Criminal Justice System

“Unwarranted is the taxonomy of policing this country has been waiting for. In a sweeping overview of policing problems spanning illegal police searches, warrantless stops, intrusive surveillance, and the toxic impact of race and class on such intrusions, Friedman painstakingly lays out the reasons we have—as a society—largely avoided policing the police. This is a long-overdue indictment of the ways in which our courts, legislatures, and even We the People have absolved ourselves of the responsibility of repairing our system of policing, and a call to action that reminds us that we alone can effectuate lasting, and attainable, reform.” —Dahlia Lithwick, Senior Legal Correspondent, Slate

“In this remarkably lucid and persuasive book, Barry Friedman forces us to confront the most difficult, uncomfortable question about policing: not what should the police do, but what do we want the police to do? With insight and passion, Unwarranted lays out a vision for truly democratic policing. A must-read.” —Chris Hayes, host of All In with Chris Hayes and author of Twilight of the Elites: America After Meritocracy