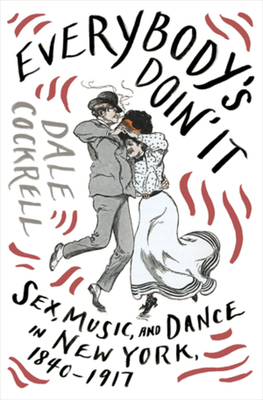 Everybody’s Doin’ It is the eye-opening story of popular music’s seventy-year rise in the brothels, dance halls, and dives of New York City. It traces the birth of popular music, including ragtime and jazz, to convivial meeting places for sex, drink, music, and dance. Whether coming from a single piano player or a small band, live music was a nightly feature in New York’s spirited dives, where men and women, often black and white, mingled freely—to the horror of the elite.

This rollicking demimonde drove the development of an energetic dance music that would soon span the world. The Virginia Minstrels, Juba, Stephen Foster, Irving Berlin and his hit “Alexander’s Ragtime Band,” and the Original Dixieland Jass Band all played a part in popularizing startling new sounds.

Musicologist Dale Cockrell recreates this ephemeral underground world by mining tabloids, newspapers, court records of police busts, lurid exposés, journals, and the reports of undercover detectives working for social-reform organizations, who were sent in to gather evidence against such low-life places. Everybody’s Doin’ It illuminates the how, why, and where of America’s popular music and its buoyant journey from the dangerous Five Points of downtown to the interracial black and tans of Harlem.

Dale Cockrell is professor emeritus of musicology at Vanderbilt University and a research associate of the University of the Free State (South Africa). His Demons of Disorder won the C. Hugh Holman Award. He lives in Vermont and New York City.

Everybody’s Doin’ It exposes the interracial and underworld origins of popular song and dance in the United States. Dale Cockrell takes us into the sensual confines of the nineteenth-century concert saloons, cabarets, dives, and dance halls propagating a new cultural genre: American popular music.

Dale Cockrell takes us on a bawdy trip back to the dives and concert saloons of old New York. His book is one hell of a ride into the past, and a complicated one: he reminds us of the tragic fact that prostitution, ubiquitous at the time—after all, what options did women then have to survive?—was an integral part of New York’s rollicking music scene.
— Alice Sparberg Alexiou, author of Devil’s Mile: The Rich, Gritty History of the Bowery

Dale Cockrell tells the stories of cellar clubs and what he calls the ‘discord of the dives.’ He scrapes the bottom of the archives to scour reports by police, tabloids, and moral reformers. Cockrell reads this neglected evidence with exuberant skepticism. Racy scholarship does the Grizzly Bear here with theoretical rigor.
— William Lhamon, author of Raising Cain: Blackface Performance from Jim Crow to Hip Hop

In this brilliant and important study, Dale Cockrell reveals the conditions within which black and white artists forged the idioms of American popular music. You’ll never listen to ragtime the same way again!
— Susan McClary, author of Feminine Endings: Music, Gender, and Sexuality

I devoured this book and had to keep reminding myself that Dale Cockrell couldn’t have actually been there in person! His keen archivist’s gaze has once again opened a new world for readers, showing us how much has changed and how much has stayed the same, from the backroom saloons of the 1870s to Studio 54 in the 1970s.
— Daniel Goldmark, director of the Center for Popular Music Studies

Another scintillating gem from one of the rock stars of American musicology. Cockrell draws on sources we didn’t know existed to draw conclusions we couldn’t have foreseen. He not only illuminates the music of the title’s time period but also puts jazz scholarship on a different footing. Everybody should be readin’ it!
— Robert Walser, author of Running with the Devil: Power, Gender, and Madness in Heavy Metal Music