Son of the Revolution (Paperback) 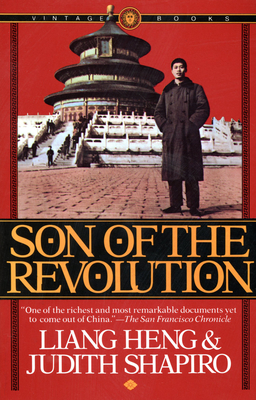 By Liang Heng, Judith Shapiro
$17.00
Email or call for price.

An autobiography of a young Chinese man whose childhood and adolescence were spent in Mao's China during the Cultural Revolution.

Liang Heng was born in Changsha, Hunan Province, in 1954, and graduated from the Human Teachers' College in 1981. After his Marriage to Judith Shapiro, he came to the United States, where he earned an M.A. at Columbia University. He is now working quietly to promote intellectual freedom in China

Judith Shapiro works at American University and is on the faculty of the Global Environmental Politics program and directs the Dual Degree in Natural Resources and Sustainable Development (NRSD) with University for Peace in Costa Rica.

Liang Heng was born in 1954 in Changsha, a large city in Central China. His parents were intellectuals -- his father a reporter on a major provincial newspaper, his mother a ranking cadre in the local police. This is Liang Heng's own story of growing up in the turmoil of the Great Cultural Revolution. His story is unique, but at the same time it is in many ways typical of those millions of young Chinese who have been tested almost beyond endurance in recent years. In his words we hear an entire generation speaking.

"A poignant inside look at what happened to ordinary citizens when the movement that ousted Chiang Kaishek's totalitarianism turned against itself. Liang helps Americans understand the past that China's leaders must overcome to cope with the future."

"Three stories in one -- first, a graphic, I-was-there account of what it was like to grow up during the Cultural Revolution; second, a cliffhanger love story with a happy ending; and third, a poignant analysis of how Chinese people have tried and failed, and tried again, to break out of their past. Each of these accounts is worth reading on its own." -- The New York Review of Books

"A significant event in our understanding of China...compelling, detailed, and devastating."