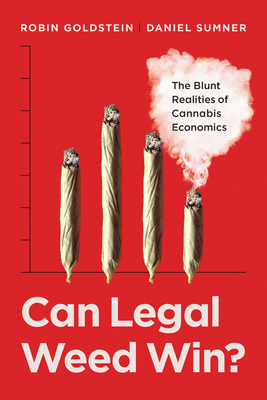 Two economists take readers on a tour of the economics of legal and illegal weed, showing where cannabis regulation has gone wrong and how it could do better.

Cannabis "legalization" hasn't lived up to the hype. Across North America, investors are reeling, tax collections are below projections, and people are pointing fingers. On the business side, companies have shut down, farms have failed, workers have lost their jobs, and consumers face high prices. Why has legal weed failed to deliver on many of its promises? Can Legal Weed Win? takes on the euphoric claims with straight dope and a full dose of economic reality.

This book delivers the unadulterated facts about the new legal segment of one of the world's oldest industries. In witty, accessible prose, economists Robin Goldstein and Daniel Sumner take readers on a whirlwind tour of the economic past, present, and future of legal and illegal weed. Drawing upon reams of data and their own experience working with California cannabis regulators since 2016, Goldstein and Sumner explain why many cannabis businesses and some aspects of legalization fail to measure up, while others occasionally get it right. Their stories stretch from before America's first medical weed dispensaries opened in 1996 through the short-term boom in legal consumption that happened during COVID-19 lockdowns. Can Legal Weed Win? is packed with unexpected insights about how cannabis markets can thrive, how regulators get the laws right or wrong, and what might happen to legal and illegal markets going forward.

Robin Goldstein is an economist and author of The Wine Trials, the controversial exposé of wine snobbery that became the world's best-selling guide to cheap wine. He is Director of the Cannabis Economics Group in the Department of Agricultural and Resource Economics at the University of California, Davis. He has an AB from Harvard University, a JD from Yale Law School, and a PhD in economics from the University of Bordeaux.

Daniel Sumner is Frank H. Buck, Jr. Distinguished Professor of Agricultural and Resource Economics at the University of California, Davis. He grew up on a California fruit farm, served on the president's Council of Economic Advisers, and was Assistant Secretary of Economics at the US Department of Agriculture before joining the UC Davis faculty. He has a BS from Cal Poly and a PhD in economics from the University of Chicago.

"In this lucid and pragmatic analysis, U.C. Davis economists Goldstein and Summer extinguish overheated predictions about the potential size and profits of the legal marijuana market. . . . Jargon-free and data-rich, this is a clear-eyed analysis of a hazy market."
— Publishers Weekly

“Economists Goldstein and Sumner argue that government bureaucracy has made legal pot expensive to grow and sell, incentivizing illegal operations instead. Legal weed, their punny, breezy book shows, can only win once 'legal' isn’t an anticompetitive word.”
— Bloomberg Businessweek

"An excellent primer on the state of the cannabis industry in America today."
— Jacobin