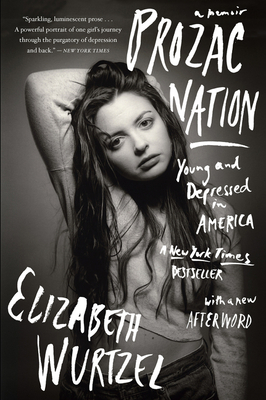 By Elizabeth Wurtzel
$16.99
Not currently on the shelf, but we can order it, to pick up in store or have shipped from our remote warehouse.

"Sparkling, luminescent prose . . . A powerful portrait of one girl's journey through the purgatory of depression and back." —New York Times

"A book that became a cultural touchstone." —New Yorker

Elizabeth Wurtzel writes with her finger on the faint pulse of an overdiagnosed generation whose ruling icons are Kurt Cobain, Xanax, and pierced tongues. Her famous memoir of her bouts with depression and skirmishes with drugs, Prozac Nation is a witty and sharp account of the psychopharmacology of an era for readers of Girl, Interrupted and Sylvia Plath’s The Bell Jar.

ELIZABETH WURTZEL (1967-2020) was the author of best-selling books including Prozac Nation,Bitch: In Praise of Difficult Women, and More, Now, Again. A Harvard and Yale Law School graduate, her work appeared in such publications as The New Yorker,New York, the Guardian, and the Oxford American.