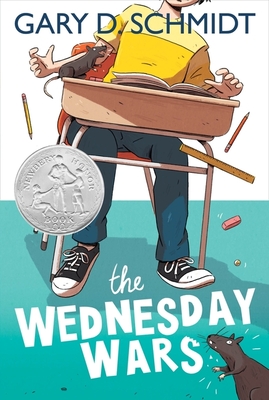 In this Newbery Honor–winning novel, Gary D. Schmidt tells the witty and compelling story of a teenage boy who feels that fate has it in for him.

Seventh grader Holling Hoodhood isn't happy. He is sure his new teacher, Mrs. Baker, hates his guts. Throughout the school year, Holling strives to get a handle on the Shakespeare plays Mrs. Baker assigns him to read on his own time, and to figure out the enigmatic Mrs. Baker. At home, Holling's domineering father is obsessed with his business image and disregards his family.

As the Vietnam War turns lives upside down, Holling comes to admire and respect both Shakespeare and Mrs. Baker, who have more to offer him than he imagined. And when his family is on the verge of coming apart, he also discovers his loyalty to his sister, and his ability to stand up to his father when it matters most.

Each month in Holling's tumultuous seventh-grade year is a chapter in this quietly powerful coming-of-age novel set in suburban Long Island during the late '60s.

Gary D. Schmidt is the best-selling author of many books for young readers, including Just Like That; National Book Award finalist Okay for Now; Pay Attention, Carter Jones; Orbiting Jupiter; the Newbery Honor and Printz Honor Book Lizzie Bright and the Buckminster Boy; and the Newbery Honor Book The Wednesday Wars. He is a professor of English at Calvin University in Grand Rapids, Michigan.

"Schmidt [gets] to the emotional heart of every scene without overstatement. Another virtuoso turn by the author of Lizzie Bright." — Kirkus Reviews (starred review)

"One of my favorite books of the year." — New York Times

"An entertaining and nuanced novel. There are laugh-out-loud moments that leaven the many poignant ones." — School Library Journal

"An accessible, humorous school story, and at the same time, an insightful coming-of-age tale." — BookPage

"Fans of Lizzie Bright and the Buckminster Boy may be pleasantly surprised to see Schmidt's lighter, even sillier side." — Bulletin of the Center for Children’s Books