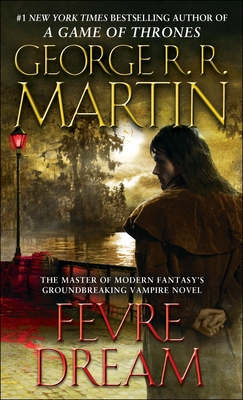 A THRILLING REINVENTION OF THE VAMPIRE NOVEL BY THE MASTER OF MODERN FANTASY, GEORGE R. R. MARTIN

Abner Marsh, a struggling riverboat captain, suspects that something’s amiss when he is approached by a wealthy aristocrat with a lucrative offer. The hauntingly pale, steely-eyed Joshua York doesn’t care that the icy winter of 1857 has wiped out all but one of Marsh’s dilapidated fleet; nor does he care that he won’t earn back his investment in a decade. York’s reasons for traversing the powerful Mississippi are to be none of Marsh’s concern—no matter how bizarre, arbitrary, or capricious York’s actions may prove. Not until the maiden voyage of Fevre Dream does Marsh realize that he has joined a mission both more sinister, and perhaps more noble, than his most fantastic nightmare—and humankind’s most impossible dream.

George R. R. Martin is the #1 New York Times bestselling author of many novels, including the acclaimed series A Song of Ice and Fire—A Game of Thrones, A Clash of Kings, A Storm of Swords, A Feast for Crows, and A Dance with Dragons—as well as Tuf Voyaging, Fevre Dream, The Armageddon Rag, Dying of the Light, Windhaven (with Lisa Tuttle), and Dreamsongs Volumes I and II. He is also the creator of The Lands of Ice and Fire, a collection of maps from A Song of Ice and Fire featuring original artwork from illustrator and cartographer Jonathan Roberts, and The World of Ice & Fire (with Elio M. García, Jr., and Linda Antonsson). As a writer-producer, Martin has worked on The Twilight Zone, Beauty and the Beast, and various feature films and pilots that were never made. He lives with the lovely Parris in Santa Fe, New Mexico.

“A novel that will delight fans of both Stephen King and Mark Twain . . . darkly romantic, chilling and rousing by turns . . . a thundering success.”—Roger Zelazny

“An adventure into the heart of darkness that transcends even the most inventive vampire novels . . . Fevre Dream runs red with original, high adventure.”—Los Angeles Herald Examiner

“Stands alongside Anne Rice’s Interview with the Vampire as a revolutionary work.”—Rocky Mountain News