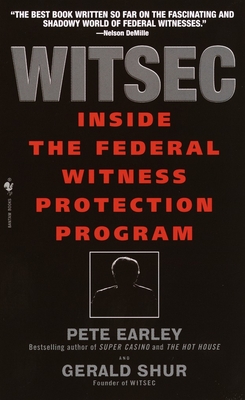 By Pete Earley
Email or call for price.
NOT AVAILABLE PLEASE DON'T ORDER

For decades no law enforcement program has been as cloaked in controversy and mystery as the Federal Witness Protection Program. Now, for the first time, Gerald Shur, the man credited with the creation of WITSEC, teams with acclaimed investigative journalist Pete Earley to tell the inside story of turncoats, crime-fighters, killers, and ordinary human beings caught up in a life-and-death game of deception in the name of justice.

When the government was losing the war on organized crime in the early 1960s, Gerald Shur, a young attorney in the Justice Department’s Organized Crime and Racketeering Section, urged the department to entice mobsters into breaking their code of silence with promises of protection and relocation. But as high-ranking mob figures came into the program, Shur discovered that keeping his witnesses alive in the face of death threats involved more than eradicating old identities and creating new ones. It also meant cutting off families from their pasts and giving new identities to wives and children, as well as to mob girlfriends and mistresses.

It meant getting late-night phone calls from protected witnesses unable to cope with their new lives. It meant arranging funerals, providing financial support, and in one instance even helping a mobster’s wife get breast implants. And all too often it meant odds that a protected witness would return to what he knew best–crime.

In this book Shur gives a you-are-there account of infamous witnesses, from Joseph Valachi to “Sammy the Bull” Gravano to “Fat Vinnie” Teresa, of the lengths the program goes to to keep its charges safe, and of cases that went very wrong and occasionally even protected those who went on to kill again.

He describes the agony endured by innocent people who found themselves in the wrong place at the wrong time and ended up in a program tailored to criminals. And along with Shur’s war stories, WITSEC draws on the haunting words of one mob wife, who vividly describes her life of lies, secrecy, and loss inside the program.

A powerful true story of the inner workings of one of the most effective and controversial weapons in the war against organized crime and the inner workings of organized crime itself–and more recently against Colombian drug dealers, outlaw motorcycle gang members, white-collar con men, and international terrorists–this book takes us into a tense, dangerous twilight world carefully hidden in plain sight: where the family living next door might not be who they say they are. . .

PETE EARLEY is the author of Family of Spies, The Hot House, Super Casino, and Circumstantial Evidence, an Edgar Award winner for Best Fact Crime.

GERALD SHUR, now retired, was the founder and longtime head of WITSEC. Both live near Washington, D.C.