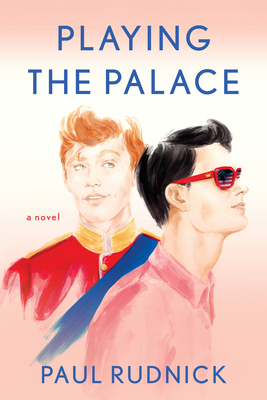 When a lonely American event planner starts dating the gay Prince of Wales, a royal uproar ensues: is it true love or the ultimate meme? Find out in this hilarious romantic comedy.

After having his heart trampled on by his cheating ex, Carter Ogden is afraid love just isn’t in the cards for him. He still holds out hope in a tiny corner of his heart, but even in his wildest dreams he never thought he’d meet the Crown Prince of England, much less do a lot more with him.  Yes, growing up he’d fantasized about the handsome, openly gay Prince Edgar, but who hadn’t? When they meet by chance at an event Carter’s boss is organizing, Carter’s sure he imagined all that sizzling chemistry. Or was it mutual?

This unlikely but meant-to-be romance sets off media fireworks on both sides of the Atlantic.  With everyone having an opinion on their relationship and the intense pressure of being constantly in the spotlight, Carter finds ferocious obstacles to his Happily Ever After, including the tenacious disapproval of the Queen of England. Carter and Price Edgar fight for a happy ending to equal their glorious international beginning. It’s a match made on Valentine’s Day and in tabloid heaven.

Paul Rudnick is a novelist, playwright, essayist, and screenwriter, whom The New York Times has called "one of our preeminent humorists." His plays have been produced both on and off Broadway and around the world, and include I Hate Hamlet, Jeffrey, The Most Fabulous Story Ever Told, Valhalla, Regrets Only, and The New Century. His novels include Social Disease and I'll Take It, both from Knopf. He's a regular contributor to The New Yorker, and his articles and essays have also appeared in The New York Times, Esquire, Vogue, and Vanity Fair.

"Award-winning playwright, humorist, and novelist Rudnick steeps his writing in a deliciously snarky sense of wit while at the same time effectively employing his flair for clever storytelling in the creation of a delightfully quirky cast of characters. The end result is a fizzy, fun, fresh, and fairy tale-like rom-com that will restore readers' faith in true love."—Booklist

“[in] Rudnick’s effervescent new novel…the question isn’t whether love will triumph, only how. The answer may make you cheer.”—The New York Times

"From the screenwriter of Sister Act, Jeffrey, and The Stepford Wives comes this highly anticipated rom-com debut. Event planner Carter Ogden meets and has instant chemistry with the sought after Prince of Wales, giving way to a high-profile romance that comes with a unique set of obstacles."—Oprah.com

“A sweet story that’s both hilariously funny and as romantic as any harlequin.”—Parade

“Rudnick imbues every page of Playing the Palace with a sense of humor and quick-witted snark. It combines the best laugh-track pacing of a sitcom with the big-hearted story arc of a romantic comedy. The over-the-top storylines and characters are guaranteed to leave even the most cynical readers rooting for an improbable happily-ever-after.”—Shelf Awareness

"A charming, funny, highly entertaining love story that reminds us what might happen if we were to get what we wish for."—Edge Media Network

“This charming and sweet romance is pure escapism with heart and soul.”—Barnes & Noble Blog

“[Rudnick] been called one of the funniest writers for stage and screen in the U.S. His latest work of fiction does not fall short of that praise….Rudnick's skill as a writer animates every page, with humor woven through the entire story.”—Gay & Lesbian Review