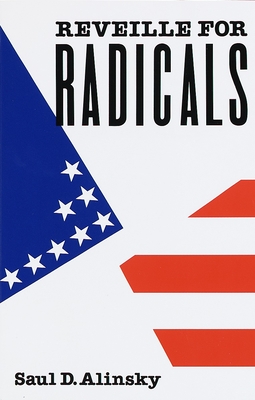 By Saul Alinsky
$16.00
Not currently on the shelf, but we can order it, to pick up in store or have shipped from our remote warehouse.

Legendary community organizer Saul Alinsky inspired a generation of activists and politicians with Reveille for Radicals, the original handbook for social change. Alinsky writes both practically and philosophically, never wavering from his belief that the American dream can only be achieved by an active democratic citizenship. First published in 1946 and updated in 1969 with a new introduction and afterword, this classic volume is a bold call to action that still resonates today.

Saul Alinsky was born in Chicago in 1909 and educated first in the streets of that city and then in its university. Graduate work at the University of Chicago in criminology introduced him to the Al Capone gang, and later to Joliet State Prison, where he studied prison life. He founded what is known today as the Alinsky ideology and Alinsky concepts of mass organization for power. His work in organizing the poor to fight for their rights as citizens has been internationally recognized. In the late 1930s he organized the Back of the Yards area in Chicago (the neighborhood made famous in Upton Sinclair's The Jungle). Subsequently, through the Industrial Areas Foundation which he began in 1940, Mr. Alinsky and his staff helped to organize communities not only in Chicago but throughout the country. He later turned his attentions to the middle class, creating a training institute for organizers. He died in 1972.

“Alinsky is that rarity in American life, a superlative organizer, strategist, and tactician who is also a social philosopher.”
—Charles E. Silberman

“He cannot be bought; he cannot be intimidated; and he breaks all the rules.”
—The Economist (London)

“I consider him to be one of the few really great men of our century.”
—Jacques Maritain