Boko Haram: The History of an African Jihadist Movement (Hardcover) 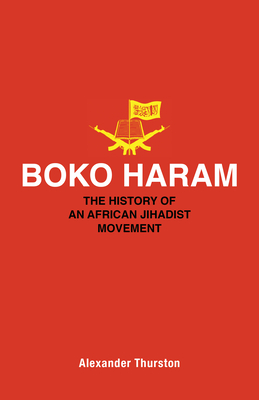 By Alexander Thurston
$29.95
Not currently on the shelf, but we can order it, to pick up in store or have shipped from our remote warehouse.

A comprehensive history of one of the world's deadliest jihadist groups

Boko Haram is one of the world's deadliest jihadist groups. It has killed more than twenty thousand people and displaced more than two million in a campaign of terror that began in Nigeria but has since spread to Chad, Niger, and Cameroon as well. This is the first book to tell the full story of this West African affiliate of the Islamic State, from its beginnings in the early 2000s to its most infamous violence, including the 2014 kidnapping of 276 Nigerian schoolgirls. Drawing on sources in Arabic and Hausa, rare documents, propaganda videos, press reports, and interviews with experts in Nigeria, Cameroon, and Niger, Alexander Thurston sheds new light on Boko Haram's development. He shows that the group, far from being a simple or static terrorist organization, has evolved in its worldview and ideology in reaction to events. Chief among these has been Boko Haram's escalating war with the Nigerian state and civilian vigilantes. The book closely examines both the behavior and beliefs that are the keys to understanding Boko Haram. Putting the group's violence in the context of the complex religious and political environment of Nigeria and the Lake Chad region, the book examines how Boko Haram relates to states, politicians, Salafis, Sufis, Muslim civilians, and Christians. It also probes Boko Haram's international connections, including its loose former ties to al-Qaida and its 2015 pledge of allegiance to ISIS. An in-depth account of a group that is menacing Africa's most populous and richest country, the book also illuminates the dynamics of civil war in Africa and jihadist movements in other parts of the world.

Alexander Thurston is visiting assistant professor of political science and comparative religion at Miami University, and the author of Salafism in Nigeria: Islam, Preaching, and Politics.