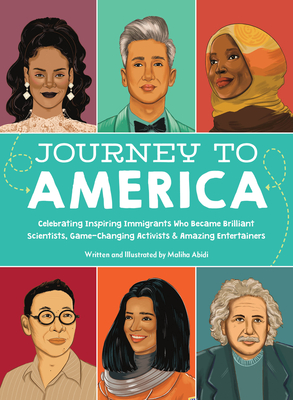 A timely, beautiful exploration of America’s rich history of diversity, Journey to America profiles 20 immigrants and children of immigrants who have affected the nation’s culture or business.

From showstopping entertainers to game-changing activists to brilliant scientists, these first- and second-generation Americans show the determination and innovation that has shaped the country we know today: Journey to America gives you all the stats, facts, and behind-the-scenes information on who they are as well as what they’ve done.

Author-illustrator Maliha Abidi’s striking illustrated portraits bring the personalities to life in vivid color. Sidebars explain historical and political facts about the immigration process, highlighting the differences between a permanent resident and a citizen, a first- and second-generation American, and more.

As children develop their own dreams for the future, the diverse stories and accomplishments of these American immigrants serve as inspiration.

Maliha Abidi is a Pakistani-American artist and author living between London and Los Angeles. Born and raised in Karachi, Pakistan, she migrated to California, United States at the age of 14. As a South Asian immigrant, her experiences play a huge role in her work. Her art focuses on advocating for social justice including women’s rights, girls’ education and mental health. Using bright and bold colors, Maliha hopes to get people interested in complex issues that impact our societies. As Maliha says, “Come for the art, stay for the cause.”

She is also the founder and creator of @WomenriseNFT. A Web 3.0 initiative with the focus on women’s rights and girls’ education through using art as a tool for advocacy.

“An inspiring collection that shines a spotlight on the life-changing contributions made by immigrants, sure to encourage young readers to follow their dreams.”—Selenia Paz, Booklist