A Dangerous Stir: Fear, Paranoia, and the Making of Reconstruction (Hardcover) 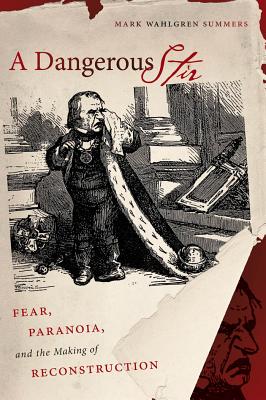 By Mark W. Summers
Email or call for price.
Out of Print

Reconstruction policy after the Civil War, observes Mark Wahlgren Summers, was shaped not simply by politics, principles, and prejudices. Also at work were fears--often unreasonable fears of renewed civil war and a widespread sense that four years of war had thrown the normal constitutional process so dangerously out of kilter that the republic itself remained in peril.
To understand Reconstruction, Summers contends, one must understand that the purpose of the North's war was--first and foremost--to save the Union with its republican institutions intact. During Reconstruction there were always fears in the mix--that the Civil War had settled nothing, that the Union was still in peril, and that its enemies and the enemies of republican government were more resilient and cunning than normal mortals. Many factors shaped the reintegration of the former Confederate states and the North's commitment to Reconstruction, Summers agrees, but the fears of war reigniting, plots against liberty, and a president prepared to father a coup d'etat ranked higher among them than historians have recognized.
Both a dramatic narrative of the events of Reconstruction and a groundbreaking new look at what drove these events, "A Dangerous Stir" is also a valuable look at the role of fear in the politics of the time--and in politics in general.