Vengeance Is Mine, All Others Pay Cash (Paperback) 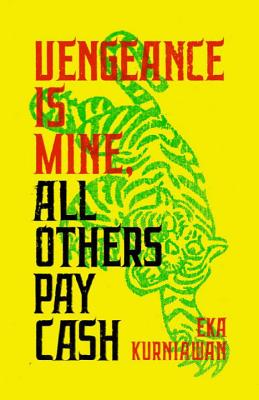 By Eka Kurniawan, Annie Tucker (Translated by)
$15.95
Email or call for price.

Told in short, cinematic bursts, Vengeance Is Mine, All Others Pay Cash is gloriously pulpy. Ajo Kawir, a lower-class Javanese teenage boy excited about sex, likes to spy on fellow villagers in flagrante, but one night he ends up witnessing the savage rape of a beautiful crazy woman by two policemen. Deeply traumatized, he becomes impotent. His efforts to get his virility back all fail, and Ajo Kawir turns to fighting as a way to vent his frustrations. He gets such a fearsome reputation as a brawler that he is hired to kill a thug named The Tiger, but instead Ajo Kawir falls in love with Iteung, a gorgeous female bodyguard who works for the local mafia. Alas, the course of true love never did run smooth… Fast-forward a decade. Now a truck driver, Ajo Kawir has reached a new equanimity, thinking that his penis may be trying to teach him a lesson and even consulting it in many situations as if it were his guru—love may yet triumph.

Vengeance Is Mine, All Others Pay Cash shows Eka Kurniawan in a gritty, comic, pungent mode that fans of Quentin Tarantino will appreciate. But even with its liberal peppering of fights, high-speed car chases, and ladies heaving with desire, the novel continues to explore Kurniawan’s familiar themes of female agency in a violent male world dominated by petty criminals and a corrupt police state.

The internationally acclaimed author of Beauty Is a Wound and Man Tiger, Eka Kurniawan was born in West Java in 1975, the day that the little ex-Portuguese colony East Timor declared its sovereign independence.

Kurniawan tells the ribald, noir-inflected, and oddly epic story of a man’s quest to regain his sexual virility...This is an almost unbelievably fun and weird novel.
— Publishers Weekly (starred review)

The physicality of his prose and his story is invigorating.
— The Paris Review

Political and profound, even though it uses language drawn from pulp fiction and popular movies. Kurniawan tells a story about injustice, the limits of revenge and the redemptive power of love.
— Caravan

A potent blend of grounded realism and flighty fantasy... a pulpy, visceral tale of sex, violence and comeuppance
— The Economist