Superstorm Sandy: The Inevitable Destruction and Reconstruction of the Jersey Shore (Nature, Society, and Culture) (Paperback) 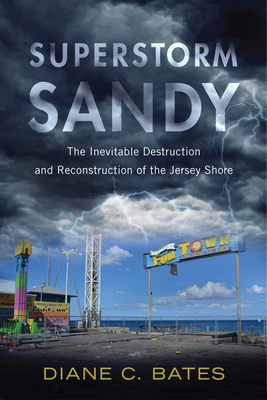 Sandy was the costliest hurricane in U.S. history after Katrina, but the waters had barely receded from the Jersey coast when massive efforts began to “Restore the Shore.”  Why do people build in areas open to repeated natural disasters?  And why do they return to these areas in the wake of major devastation?  Drawing on a variety of insights from environmental sociology, Superstorm Sandy answers these questions as it looks at both the unique character of the Jersey Shore and the more universal ways that humans relate to their environment.

Diane C. Bates offers a wide-ranging look at the Jersey Shore both before and after Sandy, examining the many factors—such as cultural attachment, tourism revenues, and governmental regulation—that combined to create a highly vulnerable coastal region. She explains why the Shore is so important to New Jerseyans, acting as a key cultural touchstone in a state that lacks a central city or even a sports team to build a shared identity among the state’s residents. She analyzes post-Sandy narratives about the Jersey Shore that trumpeted the dominance of human ingenuity over nature (such as the state’s “Stronger than the Storm” advertising campaign) or proclaimed a therapeutic community (“Jersey Strong”)—narratives rooted in emotion and iconography, waylaying any thought of the near-certainty of future storms. The book also examines local business owners, politicians, real estate developers, and residents who have vested interests in the region, explaining why the Shore was developed intensively prior to Sandy, and why restoration became an imperative in the post-storm period.

Engagingly written and insightful, Superstorm Sandy highlights the elements that compounded the disaster on the Shore, providing a framework for understanding such catastrophes and preventing them in the future.

DIANE C. BATES is a professor of sociology at the College of New Jersey, Ewing, New Jersey.

"In examining the roots of New Jersey’s storm response, Bates tracks historical data sets, including ethnic migrations and the rise of casinos, to provide a framework for the community-level response to Sandy. The result is a comprehensive view of the entire state from its foundation to the modern day. While the book is useful as an examination of the roots of the federal, state, and local reaction to Sandy, it could almost stand alone as a quick socioeconomic history of the entire state of New Jersey ... Highly recommended for policymakers, local governments, and active citizens working in any disaster-prone coastal area."
— Foreword Reviews

"Bates has written a comprehensive analysis of the New Jersey shore and the impact of Superstorm Sandy … Recommended. Upper-division undergraduates and above."
— CHOICE

"Bates' work offers a critical intervention in the burgeoning and evolving field of disaster studies, convincingly advocating for a sociological investigation into the relationship between environmental forces and human agency."
— New Jersey Studies

The Trouble with Sandy: An Interview with Diane C. Bates [http://goo.gl/KIiBbm]
— TCNJ magazine

"An engaging, well-crafted addition to the literature on the sociology of disasters in the face of climate change, Superstorm Sandy provides an impressively clear exploration of the events surrounding the hurricane. Readers can feel themselves walking down the boardwalk alongside the author and worrying alongside the residents."
— Kari Marie Norgaard

“Superstorm Sandy  provides a vivid description and wide-ranging explanation of that huge storm’s impact on Americans.  It is a ‘must read’ as we prepare for future storms in coastal America.”
— Tom Rudel