Beyond Psychoanalytic Literary Criticism: Between Literature and Mind (Hardcover) 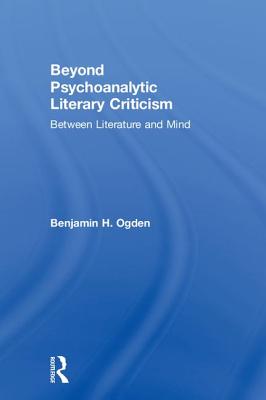 By Benjamin H. Ogden
Email or call for price.

Through a series of radical and innovative chapters, Beyond Psychoanalytic Literary Criticism: Between Literature and Mind challenges the tradition of applied psychoanalysis that has long dominated psychoanalytic literary criticism. Benjamin H. Ogden, a literary scholar, proposes that a new form of analytic literary criticism take its place, one that begins from a place of respect for the mystery of literature and the complexity of its inner workings.

In this book, through readings of authors such as J.M. Coetzee, Flannery O'Connor, and Vladimir Nabokov, the mysteries upon which literary works rely for their enduring power are enumerated and studied. Such mysteries are thereafter interwoven into a series of pioneering studies of how the conceptions of thinking, dreaming, and losing become meaningful within the unique aesthetic conditions of individual novels and poems. Each chapter is a provisional solution to the difficult bridging problems that arise when literary figures work in the psychoanalytic space, and when psychoanalysts attempt to make use of literature for analytic purposes.

At every turn, Beyond Psychoanalytic Literary Criticism: Between Literature and Mind acts as a living example of the territory it explores: the space between two disciplines, wherein the writer brings into being a form of psychoanalytic literary criticism of his own making. Forgoing traditional applied psychoanalysis and technical jargon, this highly accessible, interdisciplinary work will appeal to psychoanalysts and psychoanalytic psychotherapists, as well as literary critics and scholars.

Benjamin H. Ogden is Assistant Teaching Professor in literature and humanities at Stevens Institute of Technology. He co-authored The Analyst's Ear and the Critic's Eye: Rethinking Psychoanalysis and Literature with Thomas H. Ogden.