The Fall of America: Poems of These States 1965-1971 (City Lights Pocket Poets) (Paperback) 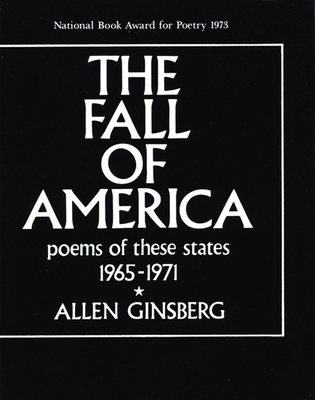 Winner of the National Book Award for Poetry

Beginning with long poem of these States, The Fall of America is the follow up book to Ginsberg's Planet News ... chronicle tape-recorded scribed by hand or sung condensed, the flux of car bus airplane dream consciousness Person during Automated Electronic War years, newspaper headline radio brain auto poesy & silent desk musings, headline flashing on road through these states of consciousness.

Includes Ginsberg's condemnation of America's actions in Vietnam, along with commentary about the moon landing, the 1968 Democratic National Convention, the death of Che Guevera, and more personal events such as the passing of Ginsberg's friend and former lover Neal Cassady. Many of the poems were initially composed on an Uher Tape recorder, purchased by Ginsberg with the help of Bob Dylan.

Poems in the collection include: Beginning of a Poem of These States; Elegy For Neal Cassady; On Neal's Ashes, Please Master, Hum Bom and September on Jessore Road.

Ginsberg] is never negligible, and he is often (the only true test) unforgettable.--Helen Vendler, New York Times Book Review

Following in the footsteps of legendary photographer Robert Frank's groundbreaking The Americans and Jack Kerouac's opus On the Road, Allen Ginsberg gives us deep insight into his poems in The Fall of America ... every poem this book refers to is a prismatic hall of mirrors ... --Paul D. Miller aka DJ Spooky