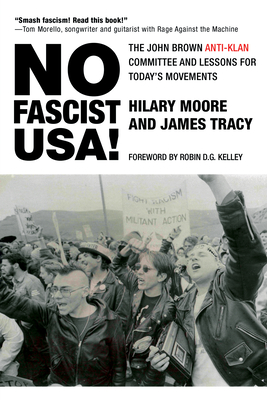 By Hilary Moore, James Tracy, Robin D. G. Kelley (Foreword by)
$16.95
Not currently on the shelf, but we can order it, to pick up in store or have shipped from our remote warehouse.

The story of how a national grassroots network fought a resurgence of the KKK and other fascist groups during the Reagan years, laying the groundwork for today's anti-fascist/anti-racist movements.

Smash fascism Read this book --Tom Morello, songwriter and guitarist with Rage Against the Machine

Studying the John Brown Anti-Klan Committee will give readers an understanding of the complexity of deconstructing the weapon of white supremacy from the inside out. Thank you Hilary and James for the precision of this analysis, and the true north of this star.--adrienne maree brown, author of Pleasure Activism and Emergent Strategy

In June 1977, a group of white anti-racist activists received an alarming letter from an inmate at a New York state prison calling for help to fight the Ku Klux Klan's efforts to recruit prison staff and influence the people incarcerated. Their response was to form the first chapter of what would eventually become a powerful, nationwide grassroots network, the John Brown Anti-Klan Committee, dedicated to countering the rise of the KKK and other far-right white nationalist groups.

No Fascist USA tells the story of that network, whose efforts throughout the 1980s--which included exposing white supremacists in public office, confronting neo-Nazis in street protests, supporting movements for self-determination, and engagement with the underground punk scene--laid the groundwork for many anti-racist efforts to emerge since. Featuring original research, interviews with former members, and a trove of graphic materials, their story offers battle-tested lessons for those on the frontlines of social justice work today.

Praise for No Fascist USA :

Hilary Moore and James Tracy have written a magnificent book that not only corrects the record but helps explain the mercurial rise of white supremacist organizations in the 1970s, how the Klan was (temporarily) defeated, and why this period has been largely ignored. No Fascist USA radically shifts our perspective, challenging the prevailing wisdom that racist terrorism rises in response to economic downturns, white downward mobility, or in a vacuum created by progressive alternatives. I love this book.--Robin D.G. Kelley, from the foreword

No Fascist USA is not only timely, but also essential in the present period of accelerated white supremacist activity and anti-racist organizing to combat it. In telling the story of the John Brown Anti-Klan Committee, the authors, without romanticizing or condemning, draw important lessons from the fifteen-year history of the group.--Roxanne Dunbar-Ortiz, author of Loaded: A Disarming History of the Second Amendment

"With its savvy blend of youth culture and street confrontation, the John Brown Anti-Klan Committee tried to stop Trumpism before Trump. They confronted the rise of white nationalism in prisons, workplaces, and music scenes when precious few paid attention to it . . . Hilary Moore and James Tracy have gifted us with an urgent read."--Dan Berger, author of Captive Nation: Black Prison Organizing in the Civil Rights Era

"James Tracy and Hilary Moore deliver a searing, bold new work that examines another painful and complicated chapter in American race relations. In an eye-opening account, They are able to connect the dots of the John Brown Anti-Klan Committee, a band of contemporary predominantly white activists, and its efforts to expose white supremacist organizations. With a fresh eye and new research, their book uncovers with stunning precision how these groups remain active and exposes some of their unlikely alliances."--Laurens Grant, filmmaker, The Black Panthers: Vanguard of the Revolution and Freedom Riders

"We learned from history. You can too "--Terry Bisson, author of Fire on the Mountain and former member of the John Brown Anti-Klan Committee

This book is a must-read for anyone wanting to understand the roots of what happened in Charlottesville, and the burgeoning white nationalist membership lists in the U.S. today. We cannot possibly take on the challenges we face without learning from the past. This book is a necessary and long overdue contribution to inform the way forward.--Carla F. Wallace, co-founder, Showing Up for Racial Justice

I've waited thirty years for this book Our emergency hearts have always driven uprisings to stop white terrorism, but it always takes more than black-bloc tactics in the streets to stop fascists. No Fascist USA firmly connects today's militant anti-fascist street-fighting movements with important living radical histories to disrupt the cycles that keep the spectre of fascism alive in the modern era. The struggles faced by the John Brown Anti-Klan Committee continue today in our difficult arc towards collective liberation.--scott crow, author of Setting Sights: Histories and Reflections on Community Armed Self-Defense

Hilary Moore is an anti-racist political educator and teaches with generative somatics. She works on the Leadership Team of Showing Up for Racial Justice, and is the co-author of No Fascist USA! The John Anti-Klan Committee and Lessons for Today's Movements (City Lights, 2020) and Organizing Cools the Planet: Tools and Reflections to Navigate the Climate Crisis (PM Press, 2011). Her newest book is Burning Earth, Changing Europe: How the Racist Right Exploits the Climate Crisis--And What We Can Do About It (Rosa Luxemburg Stiftung- Brussels, 2020).James Tracy is an author, organizer, and an Instructor of Labor and Community Studies at City College of San Francisco. He is the co-author of Hillbilly Nationalists, Urban Race Rebels and Black Power: Community Organizing in Radical Times and the author of Dispatches Against Displacement: Field Notes From San Francisco's Housing Wars.Author and historian Robin D.G. Kelley is one of the most distinguished experts on African American studies and a celebrated professor who has lectured at some of America's highest learning institutions. He is currently Professor of American Studies and Ethnicity at the University of Southern California. He is author of Thelonious Monk: His Story, His Song, His Times and is best known for his books on African American culture: Race Rebels: Culture Politics and the Black Working Class, Yo' Mama's DisFunktional!: Fighting the Culture Wars in Urban America and Freedom Dreams: The Black Radical Imagination. His career spans several esteemed universities, including serving as a Professor of History and Africana at New York University as well as acting as Chairman of NYU's History Department. While at NYU, Kelley was one of the youngest full professors in the country at 32 years of age. He was also the William B. Ransford Professor of Cultural and Historical Studies at Columbia and helped to shape programs at its Institute for Research in African American Studies. Kelley's work includes seven books as well as over 100 magazine articles, which have been featured in such publications as the New York Times, The New York Times Magazine, Rolling Stone, Code Magazine, Utne Reader, and African Studies Review.