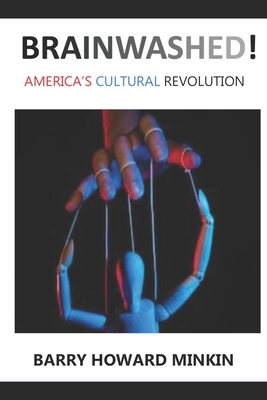 By Barry Minkin
$10.99
Not currently on the shelf, but we can order it, to pick up in store or have shipped from our remote warehouse.

The astonishing premise of this most important and timely book is that a large percentage of the U.S. population has been as brainwashed as the "Red Guard" during Mao's Cultural Revolution, and an American Cultural Revolution is already underway. This Revolution will be devastating to the lives of our children. Our public schools were traditionally the cornerstone of our country's values, teaching students how to think, not what to think. Now extremist educators indoctrinate their students and recruit them to political movements steeped in critical race theory and "social justice." They promote hatred of law enforcement and the rejection of traditional American values. Our country's youngest generations have been brainwashed to believe the United States is evil and racist and can only be saved by Marxism. With accurate predictions in writing in eight books, Minkin's proven to be very credible. Moreover, over five decades as a futurist, professional speaker, author, world affairs expert, and Senior Management Consultant at Stanford Research Institute; I've developed a reputation for "tell it like it is" objectivity. I've debated the global economy on Larry King Live with the late Robert Bartley; the editor of the Wall Street Journal called me the most "influential person in journalism.To prove the controversial brainwashing claim, he dispels dangerous politically correct myths using facts. This book blasts apart such lies as: systemic racism, the cause of George Floyd's death, illegal immigration does more good than harm, there is no voter fraud, police target Blacks, and many more bubbameisters. The book is packed full with facts and unique insights including: -How corrupt Civil Rights leaders created the "Great Con" and developed it into a multibillion-dollar victimization and "divisity" business-How slogans and myths were used to brainwash the public-How radicals metastasized throughout our universities and brainwash students-Why the EEOC is a very dangerous organization -Who funds the radical Left-How and why almost every sector of society bought into the myths, reinforcing rather than dispelling them-Why Google and a monolithic media now serve as a propaganda arm of the Left, reinforcing brainwashing using Third World type censorship-How BLM is using billions to destroy America-Why selection by color and sex over merit goes against the Civil Rights Act -How brainwashed Americans gave Biden a win-How America's Cultural Revolution will destroy our economy, security, race relations, constitution, and values -Why anti-Semitic/Zionism is on the rise. -Who is abusing our judicial system-What are the immigration facts and myths.