The Poetry and Politics of Allen Ginsberg (Paperback) 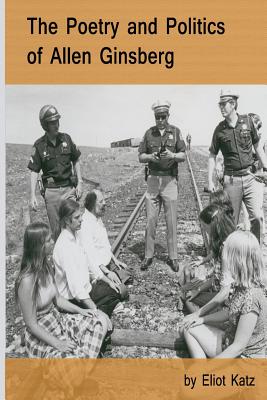 Allen Ginsberg was one of the most politically engaged writers of his era, with a widespread social and cultural impact that was rare for a poet of his or any generation. In this volume, Eliot Katz takes a readable, scholarly look at Ginsberg's most influential poems and explores the varied and inventive ways that Ginsberg turned his political ideas and perceptions into powerful poetry. While there have been some important, previous biographies and other books looking at Ginsberg's life and work, this is the first full-length volume focusing primarily on how Ginsberg's writing works as political poetry and on Ginsberg's extraordinary influence on political culture over the ensuing decades. As a longtime poet and activist himself, as well as a friend of Ginsberg's who worked with him on a number of poetry and activist endeavors, Katz brings a unique personal, political, and literary perspective to this project. This book-including its chapter on "Howl," which offers an astute and original guide to reading Ginsberg's most celebrated poem-will be of interest to students and scholars studying Ginsberg's poetry in college classrooms, as well as to general readers and writers who enjoy Ginsberg's work.

Eliot Katz is the author of seven books of poetry, including Unlocking the Exits (1999) and Love, War, Fire, Wind: Looking Out from North America's Skull (2009). His first full-length poetry book, Space and Other Poems for Love, Laughs, and Social Transformation was published in 1990, with introductions by Allen Ginsberg and Amiri Baraka, and a front cover drawing by Leon Golub. Katz is also the author of two prose e-books, Three Radical Poets: Tributes to Allen Ginsberg, Gregory Corso, and Adrienne Rich (2013) and The Moonlight of Home and Other Stories of Truth and Fiction (2013). He was a coeditor, with Allen Ginsberg and Andy Clausen, of Poems for the Nation (2000), a collection of contemporary political poems that Ginsberg was compiling in the 18 months before his death in 1997. A cofounder, with Danny Shot, and former coeditor of Long Shot literary journal, he guest-edited Long Shot's final issue, a "Beat Bush issue" released in Spring 2004. Katz's poems are included in the anthologies: Poetry After 9/11: An Anthology of New York Poets; Blood to Remember: American Poets on the Holocaust, 2nd ed.; The World the 60s Made: Politics and Culture in Recent America; Aloud: Voices from the Nuyorican Poets Cafe; Blue Stones and Salt Hay: An Anthology of Contemporary New Jersey Poets; Identity Lessons: Contemporary Writing About Learning to Be American; Bum Rush the Page: A Def Poetry Jam; Confronting Capitalism: Dispatches from a Global Movement; and In Defense of Mumia. His long essay, "Radical Eyes: Political Poetics and 'Howl'," is included in the prose collection, The Poem That Changed America: "Howl" Fifty Years Later. Of his piece in that collection, the San Francisco Chronicle's reviewer, Allan Jalon, wrote that Katz's essay "gives the book its intellectual core." Katz is also coeditor of a bilingual poetry anthology published in France in 1997, entitled Changing America: Contemporary U.S. Poems of Protest, 1980-1995. A one-time student (Naropa Institute, 1980) and a longtime friend of Allen Ginsberg's, Ginsberg called Katz "another classic New Jersey bard." Currently living in Hoboken, New Jersey, Katz has worked for many years as an activist for a wide range of peace and social-justice causes, including a decade spent as an advocate for Central New Jersey homeless families, during which he helped create several housing and food programs that remain ongoing.