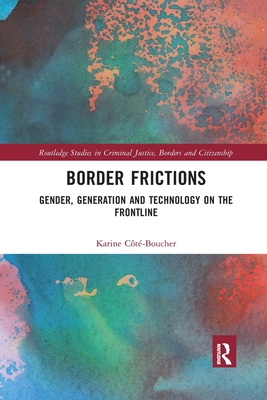 By Karine Côté-Boucher
Email or call for price.

How did Canadian border officers come to think of themselves as a "police of the border"? This book tells the story of the shift to law enforcement in Canadian border control. From the 1990s onward, it traces the transformation of a customs organization into a border-policing agency.

Border Frictions investigates how considerable political efforts and state resources have made bordering a matter of security and trade facilitation best managed with surveillance technologies. Based on interviews with border officers, ethnographic work carried out in the vicinity of land border ports of entry and policy analysis, this book illuminates features seldom reviewed by critical border scholars. These include the fraught circulation of data, the role of unions in shaping the border policy agenda, the significance of professional socialization in the making of distinct generations of security workers and evidence of the masculinization of bordering. In a time when surveillance technologies track the mobilities of goods and people and push their control beyond and inside geopolitical borderlines, C t -Boucher unpacks how we came to accept the idea that it is vital to deploy coercive bordering tactics at the land border.

Written in a clear and engaging style, this book will appeal to students and scholars in criminology, sociology, social theory, politics, and geography and appeal to those interested in learning about the everyday reality of policing the border.