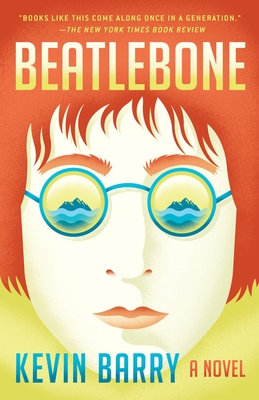 A New York Times Notable Book • It is 1978, and John Lennon has escaped New York City to try to find the island off the west coast of Ireland he bought eleven years prior.

Leaving behind domesticity, his approaching forties, his inability to create, and his memories of his parents, he sets off to calm his unquiet soul in the comfortable silence of isolation. But when he puts himself in the hands of a shape-shifting driver full of Irish charm and dark whimsy, what ensues can only be termed a magical mystery tour.

Beatlebone is a tour de force of language and literary imagination, a surreal novel that blends fantasy and reality—a Hibernian high wire act of courage, nerve, and great beauty.

Kevin Barry is the author of the highly acclaimed novel City of Bohane and two short-story collections, Dark Lies the Island and There Are Little Kingdoms. He was awarded the Rooney Prize in 2007 and won the Sunday Times EFG Short Story Award in 2012. For City of Bohane, he was short-listed for the Costa First Novel Award and the Irish Book Award, and won the Author’s Club Best First Novel Prize, the European Union Prize for Literature, and the IMPAC Dublin Literary Award. His short fiction has appeared in The New Yorker and elsewhere. He lives in County Sligo in Ireland.

“Beatlebone is a novel that takes its reader to the edge—of the Western world, of sanity, of fame, of words. But it also takes us to the very edge of the novel form, where it meets its notorious doppelgänger, autobiography. Its compulsive narrative of one of the last century’s great musicians and pop icons gradually, and without a hint of contrivance, becomes a startling and original meditation on the uncanny relationship of a writer to his character. Intricately weaving and blurring fiction and life, Beatlebone embodies beautifully this prize’s spirit of creative risk. We’re proud to crown it our winner."
—Josh Cohen, Chair of Judges, Goldsmiths Prize 2015

“Books like this come along once in a generation, books by writers with real chops, who haven’t yet been discouraged from taking real chances and blurring the lines between disciplines. Barry employs every tool in his formidable toolbox—razor-sharp prose, powerful poetics and a dramatist’s approach to dialogue unencumbered by punctuation.... And just when you think you’ve seen everything and that there’s nothing else the beast can unleash on his unsuspecting reader, he unveils a literary device this reader has never encountered before—a peek behind the curtain where the wizard wields the controls…Well, you’ll have to read the book. And it works. It all hangs together perfectly to form the kind of next-level literature that inspires, even incites another generation of natural-born wordsmiths to write big and bold and put in the work it takes to become a beast. You see the trick of it? No fear.”
—The New York Times Book Review

“Mr. Barry’s language is still poetic and reaching and imaginative, but now in effortless service to more substantial themes, in particular love and ‘the way that time moves.’ As the novel’s attention alternates between Mr. Barry’s real trip to the island and John’s made up one, the identities of the two men—both artists, both marked by the loss of their mothers—mingle, until their stories begin to overlap more and more exactly, and finally the two become indivisible, ghosts of each other across the decades. The effect is beautiful, reminiscent at different moments of Virginia Woolf and Geoff Dyer… Even as the journeys of the author and his protagonist merge, Mr. Barry and Lennon remain stubbornly distinct. But perhaps what ultimately makes this a great novel is its author’s exploration of the ways that sometimes, in art, we do get to become each other—kind of.”
—The New York Times

“The story is intriguing, not least because it's rare to come upon a lesser-known narrative about the Beatles — and yet the unexpected turn of Barry's novel, which imagines a 1978 trip by Lennon to Dorinish, is that it isn't really about the singer at all…. Barry…is a genius of the language, teasing out impressionistic riffs that channel emotion into words.”
—Los Angeles Times

“[E]xtraordinary… Kevin Barry’s Beatlebone is a strange, intense and slightly incoherent extended fantasy about two months that John Lennon spent in Ireland in 1978, fleeing an invasive press while searching for sanctuary on a remote island he had purchased on a whim. As unlikely as this premise seems, Barry is largely able to carry it off by force of imagination and by a super-charged prose style that borrows heavily from James Joyce, Flann O’Brien, J.P. Donleavy and other past masters of extravagant Irish lyricism at its high-modernist peak.
—The Washington Post

“Barry has a wry, pitch-perfect ear for dialogue and an equally affecting eye for character traits.”
—San Francisco Chronicle

“Beatlebone, the novel, reads as brilliant liner notes for a nervous breakdown, a hip, alternative history for Lennon's lost years. We know John never made a sea-mammal inspired album. We are all too well aware that Mark David Chapman is waiting in the wings. We realize the ‘John Lennon’ in Barry's book is a confection, a creation, a sleight of hand. Yet somehow readers may feel they are getting close to the real flesh and blood human. There are places he remembered, and in his life, he loved them all. Perhaps an island in Clew Bay was one of them.”
—NPR.org

"There’s music to Barry’s prose: Smart rhythms dart through his sentences; taut bridges join his paragraphs; the tinge of hysteria serves to animate his characters and their surroundings. His dialogue is whimsical, sometimes hilarious, catching the idiom of the local life, and, in Beatlebone, nailing John Lennon, the wittiest and darkest Beatle, spot on."
—Slate

"Beatlebone is an odyssey of the mind. Its ever-shifting modes vividly recall James Joyce’s Ulysses.... The island simply represents an idea. What’s at stake in his getting to the island? We never really know, which is a tricky feat to pull off. Barry succeeds by parsing John’s limbo state so clearly and vividly."
—Minneapolis Star Tribune

“Nearly every sentence exhibits the care and craft of a poet. Barry doesn’t waste a word.”
—The A.V. Club

“It’s a musical fever dream of a book that sounds weirder than it is; Barry’s perfectly honed storytelling voice sweeps readers happily through decades and across rough seas.”
—BookPage

“Barry’s prose is at once dreamy and direct, ethereal and grounded.”
—Paste Magazine.com

"Beatlebone is a perfect novel for someone who loves good fiction, or who wants to dive into the human condition, or any Beatles fan."
—The Kansas City Star

"'The examined life turns out to be a pain in the stones,' Lennon says near the end of Beatlebone. But Barry’s keenly worded quest is worth the trip."
—Las Vegas Weekly

"[Beatlebone is] a gloriously freewheeling tale imagining an attempt by John Lennon to visit the island he had bought off the coast of Mayo in 1967... Barry weaves his own odyssey to “Beatle Island” into a tale of fame, freaks, bad liquor and bad weather, with Lennon—angry, brilliant, sarcastic, tender, on a doomed quest for artistic release and his Irish roots—at its centre."
—The Guardian

"Mingling surreal black humour and breakdown, Beatlebone is a wild cascade of language and imagery, rich in wordplay and referential resonance."
—The Spectator

"Too often, novels about great artists shy away from attending to those very creative processes that made them great. Beatlebone is a committed, brutal portrait."
—Literary Review

"A famous musician's 1978 pilgrimage to an island off the west coast of Ireland takes several detours, abetted by his memories and his minder, in this original, lyrical, genre-challenging work... Nothing at all like Barry's award-winning debut novel, this may be a risky follow-up, but it's intriguing at every turn, and Barry's prose can be as mesmerizing as some of his hero's songs."
—Kirkus Reviews, starred review

"Barry, a great poet of a novelist...has created an unusual novel, remarkable in structure as well as tone, that channels the contradictory nature of Lennon himself."
—Booklist, starred review

“[Reminds] us how writing merges memory and imagination to connect the living and the dead.”
—Publishers Weekly