The Last Days of Roger Federer: And Other Endings (Paperback) 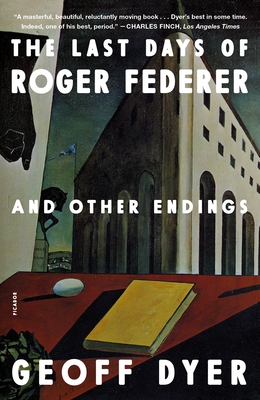 One of Esquire’s best books of spring 2022

An extended meditation on late style and last works from “one of our greatest living critics” (Kathryn Schulz, New York).

How and when do artists and athletes know that their careers are coming to an end? What if the end comes early in a writer’s life? How to keep going even as the ability to do so diminishes? In this ingeniously structured investigation, Geoff Dyer sets his own encounter with late middle age against the last days and last works of writers, painters, musicians, and sports stars who’ve mattered to him throughout his life. With playful charm and penetrating intelligence, he considers Friedrich Nietzsche’s breakdown in Turin, Bob Dylan’s reinventions of old songs, J.M.W. Turner’s proto-abstract paintings of blazing light, Jean Rhys’s late-life resurgence, and John Coltrane’s final works.

Ranging from Burning Man to Beethoven, from Eve Babitz to William Basinski, and from Annie Dillard to Giorgio de Chirico, Dyer’s study of last things is also a book about how to go on living with art and beauty—and the sudden rejuvenation offered by books, films, and music discovered late in life. Praised by Kathryn Schulz as “one of our greatest living critics, not of the arts but of life itself,” and by Tom Bissell as “perhaps the most bafflingly great writer at work in the English language today,” Dyer has now blended criticism, memoir, and badinage of the most serious kind into something entirely new. The Last Days of Roger Federer is a summation of Dyer’s passions and the perfect introduction to his sly and joyous work.

Geoff Dyer is the award-winning author of many books, including Out of Sheer Rage, Yoga for People Who Can’t Be Bothered to Do It, Zona, See / Saw, and the essay collection Otherwise Known as the Human Condition (winner of a National Book Critics Circle Award for criticism). A fellow of the Royal Society of Literature and a member of the American Academy of Arts and Sciences, Dyer lives in Los Angeles, where he is writer-in-residence at the University of Southern California. His books have been translated into twenty-four languages.

"A masterful, beautiful, reluctantly moving book—that is, moving despite its subject being naturally moving, courting no pathos, shrewd and frank—and Dyer’s best in some time. Indeed, one of his best, period . . . [The Last Days of Roger Federer], if it heralds a late style, promises [this]: a powerful and funny mind, ranging across the canons of both art and experience, cutting closer toward deep truths, telling us what things are like when time is shortening." —Charles Finch, Los Angeles Times

"The capaciousness of Dyer’s themes allow him to roam widely . . . [Dyer] has a joyous appreciation of the transcendent and the triumphant . . . Like Federer, it is a reserve of flair, touch, timing and a keen eye that keeps him in the game." —Nicholas Wroe, The Guardian

"Affirming and moving . . . [Dyer's] wit, a distinctive and delicious blend of salty, sweet and snarky, is on frequent display in his wonderful book." —Troy Jollimore, The Washington Post

"Dyer, having set out to write a book about endings, is drawn to endlessness, to the way that one thing leads to another . . . There are some gorgeous passages in The Last Days of Roger Federer, some marvelous bits of criticism, some enthralling descriptions of psychedelics." —Jennifer Szalai, The New York Times

"[Dyer is] a writer who loves to frolic in the field of ideas as freely as Federer deploys his unsurpassed array of shots . . . Reading this book is a joyful experience . . . Dyer’s exploration into mortality is often propelled into the sunlight." —Joel Drucker, Racquet

"Dyer’s mix of sparkling prose, rich insight, and mordant wit suggests that a well-lived life is worth even the bitterest of endings. It makes for a smart, memorable take." —Publishers Weekly

“Tennis, jazz, Dylan, movies, drugs, Nietzsche, Beethoven. So why am I laughing? Because Geoff Dyer once again melds commentary and observation with intellect and wit. Bouncing between criticism and memoir, Dyer is one of the few writers whose paragraphs I can immediately reread and get more from. The twists, turns, and delights abound, and when you finally put the book down you think, 'Oh, yes, I’ve always been this smart, haven’t I?'” —Steve Martin

"More than its title would suggest, The Last Days of Roger Federer is an engaging series of meditations on mental and physical sunsets in the lives of painters, musicians, philosophers, poets, boxers, and of course tennis players. Dyer the stylist is at the top of his game here, serving up conundrums, paradoxes, logical binds, and other cerebral delights. Even his syntax is witty. This generous offering of Dyer’s insightful, often hilarious, take on art, life, and sports is a feast for his readers." —Billy Collins, former United States Poet Laureate

"Just like Roger Federer's backhand Geoff Dyer's swing is a thing of beauty, complete with his signature follow through. He captures so much, touches so much and amuses the while. This form-blending book is extremely smart, wise, and simply plain fun. I am smarter for having read it. This is a great book." —Percival Everett, author of The Trees

"Who can make the world new again like Geoff Dyer? For the low low price of a book, he will rearrange the art on the walls of your memory so that you might see it again, as if for the first time. The Last Days of Roger Federer is an inspired cultural and personal mediation as well as an unsurprising delight. To read it is to feel relief that, despite Dyer’s contention that his life’s theme is 'giving up,' he hasn’t." —Sloane Crosley, author of Look Alive Out There

"Sumptuous, wide-ranging, streetwise, and precise, The Last Days of Roger Federer is a glorious ode to tennis, the arts, late style, and life itself. Full of surprises, hard truths, and deep feeling, this is a work like none other. Time remains undefeated, and yet Geoff Dyer's beautiful, unsparing book feels like it can go toe-to-toe with it––from the baseline or the net. An essential read." —Rowan Ricardo Phillips, author of The Circuit: A Tennis Odyssey and Living Weapon

"The Last Days of Roger Federer showcases Geoff Dyer's gifts as one of the most distinctive writers of our times. Whether he's writing about tennis, Nietzsche, Burning Man or growing old, Dyer brings such impeccable observation, original intelligence, and laugh-out-loud wit to the page that you want to keep on reading more—the perfect quality for a book about endings." —Maya Jasanoff, professor at Harvard University and author of The Dawn Watch

"Most authors use language to write about things. Geoff Dyer uses things to write about language. He’s a clever clogs but he’s one of us at the same time. Genius." —Simon Armitage, Poet Laureate of the United Kingdom