We Don't Know Ourselves: A Personal History of Modern Ireland (Paperback) 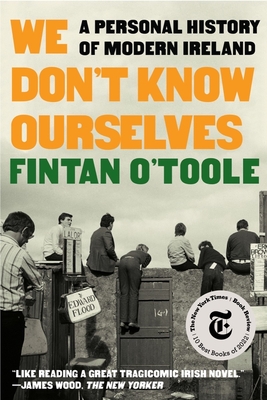 "A landmark history . . . Leavened by the brilliance of O'Toole's insights and wit.” —Claire Messud, Harper’s

Winner • 2021 An Post Irish Book Award — Nonfiction Book of the Year • from the judges: “The most remarkable Irish nonfiction book I’ve read in the last 10 years”; “[A] book for the ages.”

A celebrated Irish writer’s magisterial, brilliantly insightful chronicle of the wrenching transformations that dragged his homeland into the modern world.

Fintan O’Toole was born in the year the revolution began. It was 1958, and the Irish government—in despair, because all the young people were leaving—opened the country to foreign investment and popular culture. So began a decades-long, ongoing experiment with Irish national identity. In We Don’t Know Ourselves, O’Toole, one of the Anglophone world’s most consummate stylists, weaves his own experiences into Irish social, cultural, and economic change, showing how Ireland, in just one lifetime, has gone from a reactionary “backwater” to an almost totally open society—perhaps the most astonishing national transformation in modern history.

Born to a working-class family in the Dublin suburbs, O’Toole served as an altar boy and attended a Christian Brothers school, much as his forebears did. He was enthralled by American Westerns suddenly appearing on Irish television, which were not that far from his own experience, given that Ireland’s main export was beef and it was still not unknown for herds of cattle to clatter down Dublin’s streets. Yet the Westerns were a sign of what was to come. O’Toole narrates the once unthinkable collapse of the all-powerful Catholic Church, brought down by scandal and by the activism of ordinary Irish, women in particular. He relates the horrific violence of the Troubles in Northern Ireland, which led most Irish to reject violent nationalism. In O’Toole’s telling, America became a lodestar, from John F. Kennedy’s 1963 visit, when the soon-to-be martyred American president was welcomed as a native son, to the emergence of the Irish technology sector in the late 1990s, driven by American corporations, which set Ireland on the path toward particular disaster during the 2008 financial crisis.

A remarkably compassionate yet exacting observer, O’Toole in coruscating prose captures the peculiar Irish habit of “deliberate unknowing,” which allowed myths of national greatness to persist even as the foundations were crumbling. Forty years in the making, We Don’t Know Ourselves is a landmark work, a memoir and a national history that ultimately reveals how the two modes are entwined for all of us.

Fintan O'Toole is a columnist for the Irish Times and a professor at Princeton University. A regular contributor to the New York Review of Books and the Guardian and the author of several books, he lives in Princeton, New Jersey, and Dublin, Ireland.

O’Toole, a prolific essayist and critic, calls this inventive narrative 'a personal history of modern Ireland' — an ambitious project, but one he pulls off with élan. Charting six decades of Irish history against his own life, O’Toole manages to both deftly illustrate a country in drastic flux, and include a sly, self-deprecating biography that infuses his sociology with humor and pathos. You’ll be educated, yes — about increasing secularism, the Celtic tiger, human rights — but you’ll also be wildly, uproariously entertained by a gifted raconteur at the height of his powers.
— New York Times Book Review, 10 Best Books of 2022

In a book that is at once intimate and deeply reported—sharp in its judgments and its humor—Ireland’s finest journalist chronicles his country’s painful emergence into the modern world. Stand-alone chapters (on emigration, schools, television, contraception) form a coherent arc: from O’Toole’s childhood in working-class, tradition-bound Dublin to his reporting on Ireland’s overwhelming embrace of same-sex marriage by referendum. Two figures illustrate what Ireland has had to overcome. One is Archbishop John Charles McQuaid, the fastidious, imperious prelate who controlled Catholic life from the 1940s up to the early 1970s. McQuaid turned a blind eye to the abuse of young children by priests (and was himself later accused of abuse), epitomizing a Church that, O’Toole writes, had “successfully disabled a society’s capacity to think for itself about right and wrong.” The other is Charles Haughey, the three-time taoiseach, or prime minister, first elected in the late 1970s. Deeply corrupt, loyal to his own hypocrisy, Haughey lived like “an Ascendancy squire” while pressing to maintain bans on abortion and divorce. Central to We Don’t Know Ourselves is the uneasy coexistence of opposites: of an inward-looking past and an outward-looking present, of knowledge and denial.

Amazing. It feels special to me.
— Ian McEwan

[O’Toole] develop[s] a narrative swagger as compelling as any novel’s. His working-class Dublin background — his father, Sammy, was a bus conductor and his mother, Mary, worked in a cigarette factory — opens onto a sort of narrative everywhere. The tiny grows epic. The local becomes universal. We skip from year to year, from story to story, from tile-piece to an eventual mosaic . . . O’Toole writes brilliantly and compellingly of the dark times, but he is graceful enough to know that there is humor and light in the cracks. There is a touch of Eduardo Galeano in the way he can settle on a telling phrase. . . . But the real accomplishment of this book is that it achieves a conscious form of history-telling, a personal hybrid that feels distinctly honest and humble at the same time. O’Toole has not invented the form, but he comes close to perfecting it.
— Colum McCann, New York Times Book Review, cover review

[L]ike reading a great tragicomic Irish novel, rich in memoir and record, calamity and critique. The book contains funny and terrible things, details and episodes so pungent that they must surely have been stolen from a fantastical artificer like Flann O’Brien . . . [O’Toole] beautifully tells the private story of his childhood and youth . . . His great gift is his extremely intelligent, mortally relentless critical examination, and here he studies nothing less than the past and the present of his own nation . . . James Joyce’s Stephen Dedalus promised to forge in the smithy of his soul the uncreated conscience of his race; less Parnassian than Dedalus but just as angry as Joyce, O’Toole tells the story of how his race, at last breaking the fetters of religion and superstition, created its own conscience.
— James Wood - New Yorker

Splendid... Lively... An aversion to reality is, indeed, a poor prophylactic as Mr. O’Toole’s survey of six decades—1958 to 2018—demonstrates... All of which is elucidated with the acuity and sardonic wit that we might expect from this veteran journalist and critic... The overall tone is irreverent, yet never glib... Each episode is also cannily decoded thanks to Mr. O’Toole’s appetite for intricacies—personal, political and statistical—and his eye for idiosyncrasy.... For all its weight, this is a buoyant work. And the leavening agent is, to a large extent, Mr. O’Toole’s own story, which he relates with novelistic flair.
— Anna Mundow - Wall Street Journal

Masterful . . . O’Toole’s sweeping, intimate book covers a lifetime of Ireland’s history . . . Books about modern Ireland abound—the Irish love their words; isn’t that what people say? They include magisterial scholarship (the works of R. F. Foster), searing fiction (Edna O’Brien’s The Country Girls, John McGahern’s The Dark), and episodic recollections with a sharpened edge (John Banville’s recent Time Pieces). O’Toole’s We Don’t Know Ourselves is in a category all its own, a blend of reporting, history, analysis, and argument, explored through the lens of the author’s sensibility and experience . . . . We Don’t Know Ourselves is astonishing in its range. . . . The chapters move forward chronologically. What unites them all is O’Toole’s moral presence and literary voice: throughout, a sly, understated humor; when needed, passion and even anger. In the end, surveying what Ireland has become during his lifetime, he manages an optimistic note, one that is not merely asserted but earned. . . . I came away from We Don’t Know Ourselves seeing modern Ireland more convincingly portrayed and explained than ever before. I wish I understood modern America half as well.

A landmark history.... Leavened by the brilliance of O'Toole's insights and wit, and by the story of his own life, which he expertly intertwines into a larger historical narrative... [He] sees the country's shift with an eye that is simultaneously critical and compassionate... O'Toole's is a wildly ambitious project, one that accounts for inevitable partiality precisely through this invocation of the personal. It is a winning gambit.
— Claire Messud - Harper's

Engrossing... With deep research, a journalistic eye for detail, and a series of revealing personal anecdotes, he paints a vivid and affecting portrait of Irish life, touching on politics, religion, economics, and pop culture. The result is a comprehensive work of social criticism that tells the story of a country that was once so fixated on maintaining an idealized vision of its past that it almost gave up on the prospect of a better future.... We Don’t Know Ourselves is a powerful book, not just for what it says about Ireland, but for what it has to teach us about national identity in general. It’s a lesson that feels particularly relevant in the United States today.

[M]asterly, fascinating . . . O’Toole, a journalist, historian and academic, is Ireland’s pre-eminent public intellectual . . . We Don't Know Ourselves is surely his masterpiece, a long detailed and beautifully executed study . . . O’Toole has a marvelously sharp eye for the illuminating fact, the telling anecdote, the overlooked or forgotten piece of history; but he also has a poet's gift for figurative language.

[S]parkling . . . we encounter O’Toole as a Zelig-like figure with an amusingly personal chain of connections to the great events and characters . . . the quiet heroes of We Don’t Know Ourselves are the Irish people, who O’Toole shows to have been ahead of their political and spiritual leaders in being ready to face the contradictions that underpinned national life . . . an uplifting, almost playful read, with suggestive analysis lying beneath skillful vignettes.

The centenary of Irish independence has inspired a flood of writing. Among the many traditional histories and current political commentaries, this book stands out. It charts the extraordinary economic, social, and political transformation of Ireland since 1958, the year the author was born... The author, perhaps Ireland’s foremost public intellectual, employs a unique combination of intimately personal narrative, piquant facts and figures, and sharp (often ironic) commentary to describe the experience of this transformation.
— Andrew Moravcsik - Foreign Affairs

This powerful book is a lucid, highly informative amalgam of memoir, national history, economic, social and cultural observation, and behind-the-scenes political intelligence. . . . [O’Toole’s] narrative has the color and movement of a novel, with subplots and villains aplenty.
— Katherine A. Powers - Minneapolis Star Tribune

Reading Fintan O’Toole’s transporting We Don’t Know Ourselves is an experience close to hunger; even at 600-plus pages, there is so much richness here you want to gulp it right down.... It’s an epic story that O’Toole tells through both sweeping narratives and intimate detail.... While O’Toole laces into some targets with icy sarcasm, he is overall a generous and sympathetic observer, with an appreciation for human inconsistency. If this was not the case, could he have written so eloquently about the totemic slab of cheese known as Riverdance?

O’Toole unpacks this truth with passion and smouldering rage. Although set an ocean away, the book holds lessons, about national self-delusion and its repercussions, that are relevant here.... We Don’t Know Ourselves is a masterpiece of perceptive analysis, made accessible by personal anecdotes and clear, passionate prose.... This timely book reminds us how unknown knowns have a way of eventually becoming known knowns, how buried children often find a way to speak from the grave.

[U]tterly fascinating . . . Fintan O’Toole, the Irish Times journalist, is at his best as a reporter and commentator . . . Tracking the story of modern Ireland by pinning important cultural moments to personal events in his life allows O’Toole to humanize and particularize complex historical realities. . . O’Toole makes this book both deeply personal and rigorously objective at the same time.