How to Resist: Turn Protest to Power (Hardcover) 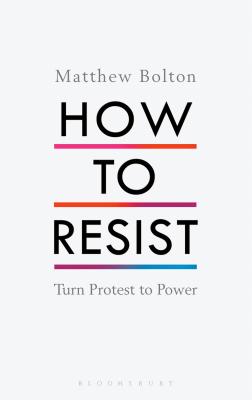 By Matthew Bolton
$14.00
Not currently on the shelf, but we can order it, to pick up in store or have shipped from our remote warehouse.

"This extraordinary book is the roadmap for a new kind of effective activism."' -- Brian Eno

"This book is for people who are angry with the ways things are and want to do something about it; for people who are frustrated with the system, or worried about the direction the country is going. Maybe they've been on a march, posted their opinions on social media, or shouted angrily at something they've seen on the news but don't feel like it's making any difference. It is for people who want to make a change but they're not sure how." -- Matthew Bolton

Matthew Bolton, Deputy Director of Citizens UK and Lead Organizer for London Citizens, has built a nationwide alliance of thousands of community campaigners who have driven two of the most effective, strategic and widest-reaching campaigns in the UK of the past two decades. He led the UK Living Wage campaign, which has won over £200 million for 150,000 low-paid workers and persuaded the Government to introduce the 'national living wage,' benefiting millions more. The Refugee Welcome and Safe Passage campaign has secured entry for over 1,100 vulnerable Syrian children, including hundreds from the 'jungle' camps of Calais. Matthew coaches community organizers across the UK, and is a Trustee of the London Community Land Trust affordable housing provider. He lives with his wife and young son in South London.

"If there's anyone worth listening to about the politics and strategy of protest, it's Matthew Bolton. After all, this is the man who led the hugely effective campaign for the living wage, and here he sets out a persuasive case for being proactive, rather than moaning about the state of the nation on social media. How to Resist is genuinely a 'how to' guide . . . inspiring stuff." - Observer

"[Bolton's] pragmatism is welcome . . . Democracy is too important to leave to other people." - Evening Standard

"If you're worried about the state of the world, Matthew Bolton's brilliant How to Resist shows how each of us can do our bit to fight populism." - Rohan Silva, Observer

"An amazingly inspiring book coming at just the right moment. A leading light in an invaluable organisation, Matthew Bolton really knows how to make stuff happen--and he wants you to know too. You might have heard that things don't have to be this way--here's the official guidebook to changing them." - Marina Hyde

"Matthew is one of the great thought and action leaders of his generation. This book will give people the power to change their communities." - Tessa Jowell

"Populism is the most important political development of our time and How to Resist makes a powerful call for a populism of mass democratic participation. We've got to put power back in people's hands and this vital guide tells us how. It's a must-read." - Steve Hilton

"If anyone knows how to do social change, it's Matthew Bolton who has been at the heart of London Citizen's successful Living Wage campaign. He's a smart, sophisticated operator and his book imparting nuggets on how to take on the system will be eagerly pored over by people who are keen to make a difference but don't quite know how to go about it." - David Cohen, Campaigns Editor and Chief Feature Writer, London Evening Standard

"With expertise and a track record that is compelling, Matthew offers tools for citizens to become more powerful and stand up to vested interests of the market and state. This book offers a vision and a method to revitalise our democracy." - Philip Blond, Director of Res Publica, author of RED TORY

"The Living Wage is perhaps the most successful grassroots campaign of the last decade and in How to Resist, Matthew gives us the key lessons and tactics behind the impact. This vital book will help turn the political energy of today into lasting change in communities and constituencies up and down the country." - Polly Toynbee, Guardian

"There's a huge appetite right now for radical change and How to Resist can equip a generation of politically engaged young people with the practical tools to organise and campaign." - Paul Mason