The Blood of Lambs: A Former Terrorist's Memoir of Death and Redemption (Hardcover) 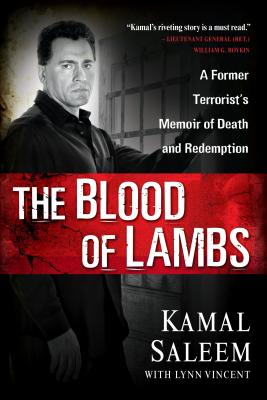 By Kamal Saleem, Lynn Vincent (With)
Email or call for price.
Hard to Find


Memoirs of a Terrorist reveals the true inside story of the life and mindset of a radical muslim terrorist who finally came to renounce his murderous mission and embrace freedom.

Some radical Muslims believe that non-Muslims who refuse to convert must die. Memoirs of a Terrorist is the true account of the life of such a terrorist who has since renounced his deadly participation in jihad, or “holy war.” His memoir conveys an urgent message to Americans to wake up to the dangers of the terrorists who are still executing their harmful and destructive schemes.

Kamal Saleem was born under a different name into a Sunni Muslim family in Lebanon. From a young age he was taught that the loftiest accomplishment he could achieve in life was to be martyred while killing infidels, namely Christians, Jews, and Americans. At age seven, he was recruited by the Muslim Brotherhood and entered an assault camp where members of al-Assifa, the armed branch of Fatah, trained for terror missions against Israel. After years of training, Saleem operatedin successful terror campaigns funded by the Muslim Brotherhood, the Palestinian Liberation Organization, and wealthy oil sheikhs. He infiltrated the United States with the sole purpose of converting others to radical Islam.

However, a life-changing event caused him to reevaluate his worldview. Kamal came to know three kind Christian men, and through them he saw the love of God—eventually coming to know their God as well. As a result of their love andsacrificial giving, Kamal acknowledged his need for Christ as Savior. Memoirs of a Terrorist is his riveting story that attests to the power of love and freedom.

Kamal Saleem was born under another name into a large Sunni Muslim family in Lebanon. At age seven, he was recruited by the Muslim Brotherhood and immediately entered a Palestinian Liberation Organization terror training camp in Lebanon. After being involved in terror campaigns in Israel, Europe, Afghanistan, and Africa, and finally making radical Islam converts in the United States, Saleem renounced jihad and became an American citizen. He has appeared on CNN, CBS News, and Fox News programs, and has spoken on terrorism and radical Islam at Stanford University, the University of California, the Air Force Academy, and other institutions nationwide. He is the author of The Blood of Lambs.

Lynn Vincent, a US Navy veteran, is a #1 New York Times bestselling author and coauthor of eleven nonfiction books with more than sixteen million copies in print, including Indianapolis, Same of Kind of Different as Me (with Ron Hall and Denver Moore) and Heaven Is for Real (with Todd Burpo). A veteran journalist and author of more than 1,000 articles, her investigative pieces have been cited before Congress and the US Supreme Court. She lives in the mountains east of San Diego with her husband and their three Labrador retrievers.