Bounded Integration: The Religion-State Relationship and Democratic Performance in Turkey and Israel (Hardcover) 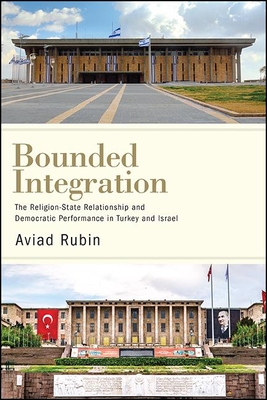 In this comparative study of the religion-state relationship in Turkey and Israel in the modern era, Bounded Integration reveals the influence this dynamic interaction has had on democratic performance in both countries. In societies where a dominant religion serves as an important component of individual and collective identity, the imposition of secular policies from above may not facilitate democratization but may rather impede the embedding of democracy in society. Moreover, the inclusion or exclusion of religion following statehood may facilitate a certain type of path-dependent political culture, one with long-term political consequences. Aviad Rubin's refreshing analytical approach comparing and contrasting the region's only two longstanding democratic entities and the dynamics of religion and the state in two different religions, Islam and Judaism, facilitates generalizable lessons for emergent political regimes in the post-Arab Spring Middle East.

Aviad Rubin is Senior Lecturer in the Division of Government and Political Theory in the School of Political Science at the University of Haifa.