In the Arena: Good Citizens, a Great Republic, and How One Speech Can Reinvigorate America (Hardcover) 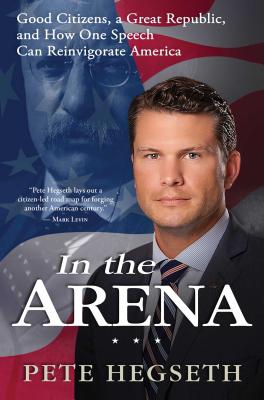 By Pete Hegseth
Email or call for price.
Hard to Find

A vigorous call-to-arms to reignite American citizenship at home and restore American power abroad, using the timeless truths of Teddy Roosevelt’s iconic “Man in the Arena” speech, by the Fox News contributor and decorated Iraq and Afghanistan war veteran.

Pete Hegseth makes an impassioned and experiential argument for how Teddy Roosevelt’s articulation of “good citizens,” “equality of opportunity,” and unapologetic U.S. leadership—“good patriots”—can renew our imperiled American experiment and save the free world, in this fascinating, first-hand challenge to elite progressivism, ahistorical foreign policy, and status-quo politics.

Despite contention surrounding Teddy Roosevelt’s legacy, Hegseth argues that the Rough Rider’s exhortation serves as a timeless wake-up call for our Republic. Hegseth resurrects Roosevelt’s famous “Citizenship in a Republic” address—best known for the “Man in the Arena” quote—as a roadmap for addressing the massive challenges facing America today. In order to rejuvenate what makes America exceptional, we must unapologetically get back into Roosevelt’s arena—as engaged “good citizens” at home and powerful “good patriots” in the world.

Bolstered by gripping personal experience, Hegseth channels Teddy Roosevelt’s words to make a case for turning America’s highest ideals into action through the gritty virtues of citizenship, the dogged pursuit of equal opportunity, and aggressive commitment to winning the wars we fight—including the Iraq War. An exceptional American experiment was entrusted to “average citizens” in 1776 and has been perpetuated by every generation since…until now. If we won’t fight for America, then what will we fight for? And if not now, then when? Get in the arena!

Pete Hegseth is a FOX News contributor who regularly appears on FOX & Friends, The Kelly File, and Outnumbered. An infantry officer in the Army National Guard, he is a veteran of Iraq, Afghani­stan, and Guantanamo Bay who holds two Bronze Stars and a Combat Infantryman’s Badge for his time overseas. He is the former CEO of the veterans advocacy organization Concerned Veterans for America and former Chairman of the pro-victory organization Vets for Freedom. He is also a graduate of Princeton Uni­versity and Harvard University’s John F. Kennedy School of Government. He writes regularly for National Review and FOXNews.com and is a term member of the Council on Foreign Relations.

"With America’s free society being strangled by progressives and bureaucrats at home and America’s leadership assaulted by Islamists and globalists abroad, Pete Hegseth lays out a citizen-led roadmap for rejecting decline and forging another American century."
— Mark Levin, nationally syndicated radio host and #1 New York Times best-selling author of Plunder and Deceit

“In the Arena is more than a memoir of service in a dangerous time for our country,. It is also a call of a true patriot for all Americans to heed Roosevelt’s challenge and take up the task of restoring American exceptionalism before it is too late.”
— Karl Rove, New York Times bestselling author of Courage and Consequence

“Invoking the words of Teddy Roosevelt, Pete makes an important case for others to join him in the area by being good and engaged citizens. In the Arena is a must-read that underscores our collective responsibility to restore America’s role as an exceptional and indispensable global leader.”
— Senator John McCain (R-AZ)

“Pete Hegseth’s In the Arena is a soldier’s clear-eyed perspective on the challenges we face in a new world disorder. It’s also a clarion call for “We the People” to save our Republic. If you care about your family’s future; before the next election, you need to read this book!”
— Lt Col Oliver North USMC (Ret), New York Times bestselling author of American Heroes on the Homefront and host of War Stories on FOX News

"Pete Hegseth has written a contemporary update to Theodore Roosevelt's iconic "man in the arena" speech, one that makes for insightful and important reading."
— Ambassador John Bolton, former U.S. Ambassador to the U.N.

“Pete Hegseth has spent a lot of time on battlefields—both metaphorical ones in Washington, and actual ones in Iraq and Afghanistan—and he's returned with a gritty and fascinating critique of a coddled, entitled—and therefore, imperiled—America in the age of Obama. The result is this book. Buy a copy. You'll come away stronger.”
— Tucker Carlson, editor-in-chief of The Daily Caller and co-host of FOX & Friends

“This book is not a memoir—it’s a call to arms. Warrior Pete Hegseth makes a powerful case for renewing the conservative cause at home and reinvigorating American leadership abroad. Pete lights the way toward another essential, free and powerful American century.”
— Katie Pavlich, editor of Townhall.com, FOX News contributor, and best-selling author of Assault and Flattery

“Pete Hegseth has written a book that's at once informative and inspiring, educational and captivating. His hero Teddy Roosevelt would have enjoyed it. So will you.”
— William Kristol, editor of The Weekly Standard

"Pete Hegseth has written an impassioned, wide-ranging book that is a rallying cry for engaged patriots to get in the arena, where we belong."
— Rich Lowry, editor of National Review

“Pete Hegseth tells the hard truths about what American needs, at home and overseas, to make the 21st century an American century. A must-read for patriots who want to fight for a free and strong America."
— Kimberly Guilfoyle, FOX News co-host of The Five and author of Making the Case

"A compelling book from a rising star. Pete Hegseth has faced the enemies of civilization in Iraq and the enemies of democracy in Washington, and his personal journey has led him to demand practical steps to put our country on course toward 'a more perfect union' again.  In an age of fluff, Hegseth delivers substance: a stand-up work from an upstanding patriot."
— Ralph Peters, Fox News Strategic Analyst and author of Valley of the Shadow

“Every page, clear and concise, forces the reader to pause and to think: What sort of America do we want, and how do we get there? A smart, combat-proven soldier with a resounding message, Pete Hegseth is a modern-day Teddy Roosevelt. He writes with verve.”
— Bing West, bestselling author of One Million Steps: a Marine Platoon at War

“In the Arena is a timely reminder of citizenship’s call to defend the American experiment. Pete Hegseth reminds us we’re each capable of the enduring commitment to advance freedom, whether through military service or by pursuing the American dream here at home.”
— Senator Tom Cotton (R-AK), Iraq and Afghanistan veteran

“America needs this book now more than ever.  Pete Hegseth brilliantly resurrects one of the finest speeches in history and illustrates how a great republic is maintained though citizenry, family, honesty and patriotism.”
— Robert J. O'Neill, SEAL Team Six

“In this engaging, well-written book, drawing on the courageous virtues Teddy Roosevelt championed a century ago, Hegseth exhorts America to renew herself. It is a challenge…and an inspiration.”
— Andrew C. McCarthy, National Review contributing editor and New York Times bestselling author of The Grand Jihad

“This book gives voice to our generation’s fight and makes a convincing case for applying the lessons we learned—strength, resolve, and leadership, among the many—to a continued world of dangerous threats. If you love America, and are concerned about our future, you should read this book.”
— Congressman Adam Kinzinger (R-IL), Iraq and Afghanistan veteran

"Be careful picking up this book, because it will motivate you to take action. This book grabs you by the shirt collar. Pete Hegseth makes an impassioned and informed case for a tough-minded foreign policy as only he can. Pete already went to war for us—read In the Arena and find out why."
— S.E. Cupp, CNN commentator and author of Losing Our Religion: The Liberal Media's Attack on Christianity

“Hegseth breaks down the poignant truths of an iconic American hero. This is a must read for anybody who desires to know what America really stands for and the underlying principles that make our country great.”
— Congressman Duncan Hunter (R-CA), Iraq and Afghanistan veteran

"A wake up call from an American patriot, soldier, and father that our nation's greatness depends on each one of us getting into the fight."
— Buck Sexton, The Blaze radio and television host and former CIA officer

"Pete Hegesth, who was among those who bravely risked their lives for our beloved nation in Iraq and Afghanistan, has given us a fine book explaining what it means to be “in the arena” and why it is critical for all of us to stand up and speak out for limited government and fidelity to the Constitution and the fundamental freedoms it protects.”
— Robert P. George, author of Conscience and Its Enemies