What Has No Place, Remains: The Challenges for Indigenous Religious Freedom in Canada Today (Paperback) 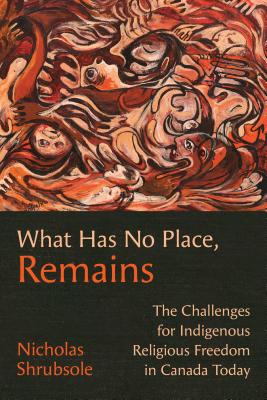 By Nicholas Shrubsole
$32.95
Email or call for price.

The desire to erase the religions of Indigenous Peoples is an ideological fixture of the colonial project marking the first century of Canada's nationhood. While the ban on certain Indigenous religious practices was lifted after World War II, it was not until 1982 that Canada recognized Aboriginal rights, constitutionally protecting the diverse cultures of Indigenous Peoples. As former Prime Minister Stephen Harper stated in Canada's apology for Indian Residential Schools, the desire to destroy Indigenous cultures, including religions, has no place in Canada today. Yet, Indigenous religions remain under threat.

Drawing on philosophical, sociological, cultural, and legal theories, What Has No Place, Remains analyzes state actions, responses, and decisions on matters of Indigenous religious freedom. With particular attention to cosmologically significant space, this book provides the first comprehensive assessment of the conceptual, cultural, political, social, and legal reasons why religious freedom for Indigenous Peoples is currently an impossibility in Canada.

Framed through a postcolonial lens and eight interrelated challenges for religious freedom, the book examines the impacts of an expanding, yet shallow, interpretation of religious freedom, secularization, and competing legal frameworks. The book is particularly concerned with legal cases, such as Ktunaxa Nation v. British Columbia (2017), but also draws on political negotiations, such as those at Voisey's Bay, and standoffs such as the one at Gustafsen Lake, to generate a more comprehensive picture of the challenges for Indigenous religious freedom beyond Canada's courts.