Our Frontier Is the World: The Boy Scouts in the Age of American Ascendancy (United States in the World) (Hardcover) 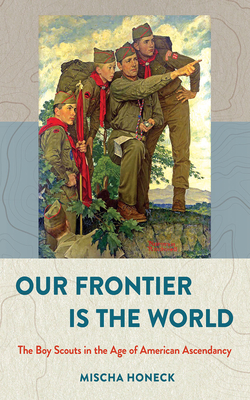 By Mischa Honeck
$39.95
Not currently on the shelf, but we can order it, to pick up in store or have shipped from our remote warehouse.

Mischa Honeck's Our Frontier Is the World is a provocative account of how the Boy Scouts echoed and enabled American global expansion in the twentieth century.

The Boy Scouts of America (BSA) has long been a standard bearer for national identity. The core values of the organization have, since its founding in 1910, shaped what it means to be an American boy and man. As Honeck shows, those masculine values had implications that extended far beyond the borders of the United States. Writing the global back into the history of one of the country's largest youth organizations, Our Frontier Is the World details how the BSA operated as a vehicle of empire from the Progressive Era up to the countercultural moment of the 1960s. American boys and men wearing the Scout uniform never simply hiked local trails to citizenship; they forged ties with their international peers, camped in foreign lands, and started troops on overseas military bases. Scouts traveled to Africa and even sailed to icy Antarctica, hoisting the American flag and standing as models of loyalty, obedience, and bravery. Through scouting America's complex engagements with the world were presented as honorable and playful masculine adventures abroad.

Innocent fun and earnest commitment to doing a good turn, of course, were not the whole story. Honeck argues that the good-natured Boy Scout was a ready means for soft power abroad and gentle influence where American values, and democratic capitalism, were at stake. In other instances the BSA provided a pleasant cover for imperial interventions that required coercion and violence. At Scouting's global frontiers the stern expression of empire often lurked behind the smile of a boy.

Mischa Honeck is Senior Lecturer in History at Humboldt University of Berlin. He is the author of We Are the Revolutionists: German-Speaking Immigrants and American Abolitionists after 1848 and coeditor of War and Childhood in the Era of the Two World Wars.