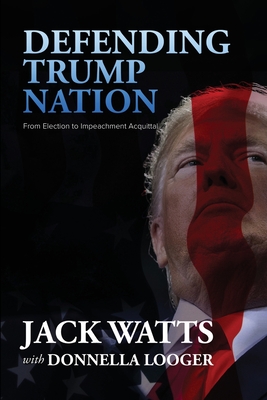 By Jack Watts, Donnella Looger (With)
$14.99
Not currently on the shelf, but we can order it, to pick up in store or have shipped from our remote warehouse.

Defending Trump Nation is a real-time apologetic for the policies and actions of President Trump since his improbable victory over Hillary Clinton in 2016. It has been written to confront the vicious attacks and deceitful reporting by the Progressive Left about everything the President has accomplished.

Each entry was originally a post on Facebook as well as a blog entry on We Believe: Reclaiming Our Heritage. Defending Trump Nation summarizes the first three years of Trump's Presidency, culminating with his acquittal in the Senate for on his Impeachment charge by the House of Representatives.

The book provides a solid rationale for why Conservative, patriotic Americans like us continue to support our President, despite the continuous assaults of the Democrats, the "Fake News" media and Progressives from Hollywood. By reading Defending Trump Nation, you will be reminded of many things you have either forgotten or have not thought about for quite a while. Most of all, Defending Trump Nation will reinforce your values and your determination to continue championing the United States of America against those who intend to destroy our heritage. We are a proud and exceptional people who do believe that God continues to bless our great nation.